New Mahindra Thar Spotted While Testing on the Roads of India

The second generation Mahindra Thar has been spotted in spied testing on the roads of India for the first time. However, the first- gen Thar was previously launched in 2010 which has been liked by the Indian customers specifically for the off-roading activity.

Since March 2017, Mahindra has been working on its upcoming second-generation Thar. To design the second- gen, Mahindra Thar, the company can take the ideas from its acquisitions Italian car design firm, Pininfarina, as well as the Korean automobile manufacturer, SsangYong along with local design team.

“For every vehicle that Mahindra develops, we will seek three proposals for its design – one each from SsangYong, Pininfarina and from our team,” Pawan Goenka, Managing Director of Mahindra & Mahindra stated in 2017.

However, the outgoing Thar model was developed by taking ideas from Bolero and the previous- generation Mahindra Scorpio. It is being speculated that the new Thar is to be based on a latest-gen modular chassis.

The camouflage unit of next-gen Mahindra Thar has been spotted near China which shows that the car will have a longer and wider chassis as compared to the outgoing model. 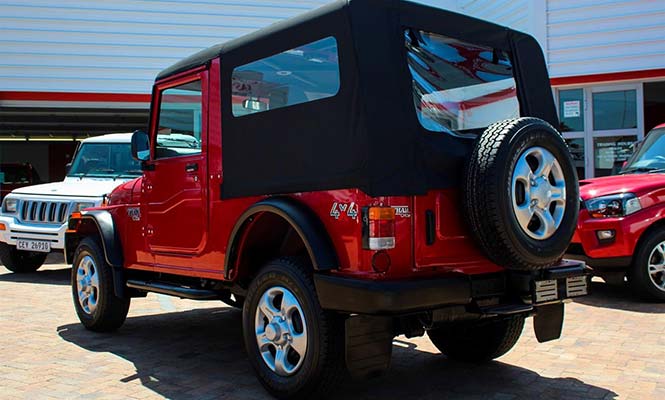 To develop the new Thar, Mahindra will use the better quality materials inside the car and likely to get more comforts directly from the factory. It is anticipated that the car will be exported to different countries across the globe. The new Mahindra Thar is likely to come with great features such as the touchscreen infotainment system. For the safety purpose, the new Thar car will get ABS, speed warning and dual airbags as standard equipment. The car crash-test compliance will be based on the upcoming norms that will be implemented from April 2020.

Read Also:- Check out the Cars in Demand in November 2018

As far as engine specifications are considered, the new Mahindra Thar will come with an latest iteration of the 2.2-litre mHawk engine. It must be complied with latest BS VI emission norms and four-wheel-drive system. The testing of new Thar is going on, might be it reveals some of the interesting information about the car.

Mahindra Confirms Next-gen, Will Not Participate in Auto Expo 2020
Views: 4725