Yamaha R25 which is one of the popular sports bikes offered by Japanese bike maker globally has been surfaced online in its next-gen avatar. The credit for providing its clear rendering goes to famed native motoring magazine, Young Machine. For your reminisce, the model which is on sale under R3 moniker in countries like India was recently spotted in its updated form performing test runs in Indonesia.

At the skin, the rendering is sporting similar changes been observed already on test mules. The one which pulls attention the most is its fascia, which has now been reworked as per the brand's latest YZF family. It now sports twin LED headlamps bifurcated by a V-shaped air vent, identical to models, the new R1, R15 V3.0 and the R6. 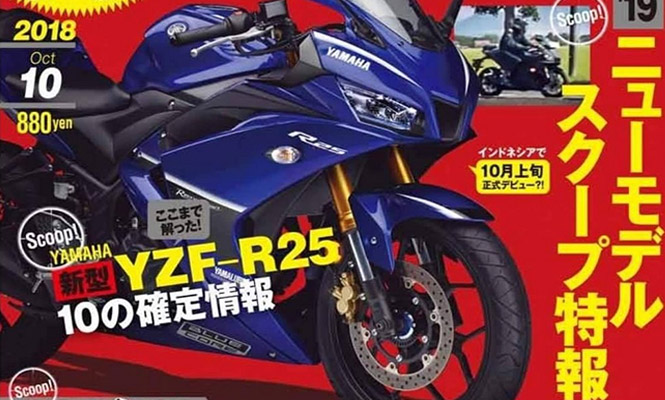 In addition to this, other noticeable modifications which offer the new Yamaha R25/R3 a sportier, race-focused appeal are the tweaked full fairing’s panels, more aerodynamic rear with integrated air vents, and a new exhaust unit. While the fuel tank is carry forwarded without any alteration.

Moreover, 2019 Yamaha R25/R3 will boast of new gold-plated USD front forks instead of the traditional telescopic unit equipped in the outgoing model. At the rear, the updated sports runner will continue with the earlier rear monoshock. For braking, we could see the similar disc units at both the front and rear wheel in association with an optional ABS fitment.

In India, instead of the R25, the bigger engined R3 serves the enthusiasts and sports bike lovers. The motorcycle which gets propelling power from the 321 cc in-line two-cylinder liquid-cooled mill, will pit against the newcomers like TVS Apache RR310 and BMW G310 which uses new single-cylinder powertrain. In addition to this, the KTM RC390 and the Kawasaki Ninja 300 are the already available rivals in the segment. Mated to a 6-speed gearbox, the 2019 Yamaha R3 is expected to use the churn of 42 PS and 29.6 Nm, post electronic adjustment to improve the performance of the bike.

The manufacturing of both the 2019 Yamaha R25/R3 will continue to be handled via brand’s Indonesia facility. At the global front, it is likely to roll out sometimes by the end of this year. While, in India, we could see its arrival in the first half of 2019 as a CKD unit.