Next Generation TVS Apache 200 Caught During The Testing, Launch Soon

The next generation TVS Apache 200 is the most awaited motorcycle. The quarter-liter motorcycle is inspired by the TVS Draken concept that made its first official appearance at the 2014 Auto Expo. Recently, the entry-level quarter-liter motorcycle has been caught again in the camera with camouflage body while testing over the Indian road. Now this time, the test mule has been spotted with TVS badging over the camshaft. The upcoming motorcycle retains some of its design and body cues with the TVS Draken concept that includes alloy wheels, fuel tank fairing, headlight panel and engine cowl. 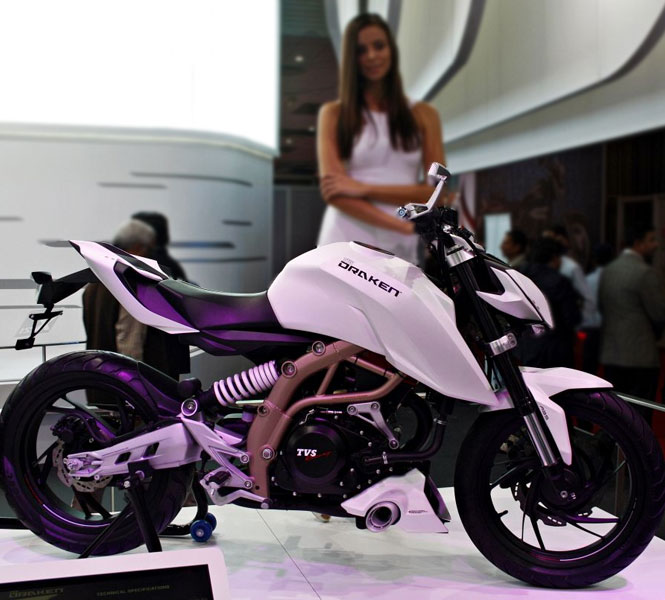 The new TVS Apache is likely to be featured with a flat handlebar and petal disc brakes at the both front and rear ends. While, the rear view mirrors, turn indicators, front forks in golden color, tail piece are retained the same from the outgoing version. The firm might be offered all- new digital instrument cluster, monoshock rear suspension and dual-channel ABS in the upcoming motorcycle. The motorcycle will be built around on the same chassis as the Apache series.

In terms of technical specifications, the company has not revealed any technical specifications about the upcoming Apache but earlier reports suggested that the next generation TVS Apache 200 is believed to be powered by a single-cylinder and liquid-cooled motor carrying an engine displacement of 200cc. The 200cc engine is likely to be produced 25 BHP of power and 20 Nm of torque, the engine will be mated to a six-speed transmission. Furthermore, the upcoming TVS Apache 200 will compete against to the Pulsar RS200 and KTM Duke 200.