Electric Vehicles are the future of mobility and the Indian two-wheeler industry is heading towards with a number of electric two-wheelers (scooters and bike) are already available in the market and a lot is yet to come. So, here in this post, we are going to compare top-of-the-line models from two prominent brands like Ather 340, 450 and Okinawa Praise. Have a look at the quick comparison based on models’ specs on paper

Okinawa i-Praise that’s powered by a 2.9kWh battery is claimed to return the impressive performance figures like a travel range in between160-180km in a single charge. Comparatively, it around three times of the Ather 340 which gets 1.92kWh battery in an ECO model. The ARAI test results claim the travel range of 86km for the Ather 340 and 107km for the 450 trim. However, these are test results but with such travel range, these scooters can make daily commute easy, without even charging twice.

The Ather 340 gets a much powerful battery than the Okinawa i-Praise still the former falls behind in terms of claimed top speed. The elder sibling Ather 450 is claimed to attain the top speed of 80kmph and it’s tested performance even with a pillion. The packed batteries here are Li-ion units and can easily be charged via any 5A sockets. The Okinawa i-Praise allows the removal of battery for charging indoors and gives an aids of keeping a spare battery for extended range during emergencies.

The Ather Scooters which are available only in white colour option sports a clean design language. On the other hand, the Okinawa i-Praise comes with several bright colour options and a noticeable, slightly bulbous front. The seat height for the Ather scooters and Okinawa i-Praise are 765mm and 800mm respectively. Not only the former model is more approachable with mentioned seat height but also offers a commendable under seat storage for a full-face S sized MT helmets, found in tests. The Okinawa on the flip of the coin boasts only 7 litres. Yet the ground clearance for the scooter perched on the 175mm is 15 mm higher than the Ather 340. However, the Ather scooters which based on a lightweight frame are light in Kerb weight at 118kg with the lowest centre of gravity in the segment. The new Okinawa i-Praise as claimed by the company will be a lighter offering (around 30-40 per cent) as compared to other vehicles in the EV segment. well, the exact kerb weight figure is not officially revealed yet. 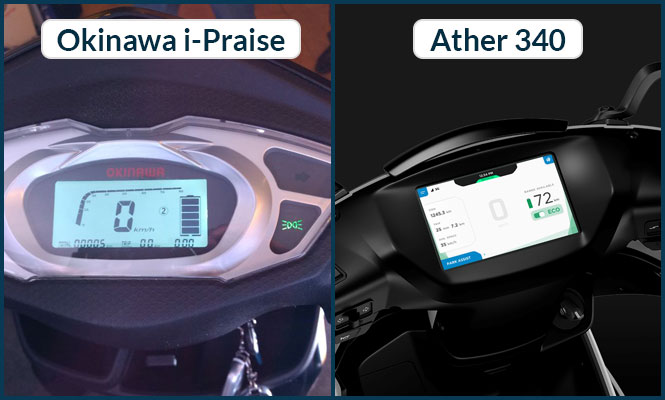 In terms of equipment, the e-scooters are wealthier as compared to petrol-powered scooters in the Indian market. All three of them comes with a digital instrument console. The i-Praise offers smartphone connectivity via ‘Okinawa Eco’ app. With its geo-fencing feature, one can set a virtual perimeter for the scooter, beyond which it starts notifying your limits. Additionally, one can get aware with aspects such as maintenance schedule details, battery, trip status and more. While, an LCD unit displays readouts like speed, range, among others.

The Ather scooters, on the other hand, get a 7.0-inch capacitive touchscreen (rated IP65- protection from dust and low-pressure water jets as well). It showcases information like speedometer, odometer, range, clock, trip meter as well as an average-speed indicator. In addition to this, the features such as the park-assist, navigation and a drop-down menu for settings and rider insights are given on the three corners of the screen. With the park-assist feature, the scooter is capable of moving in a backward direction at the speed of 3kmph.

In addition to this, the AI supported Ather scooters continue to collect information like location (GPS) and riding style information with the help of internet-enabled pre-installed SIM card from every scooter in its network.

The Ather 450 is priced at INR 1.42 lakh (ex-showroom). while, it priced INR 1.20 lakh ex-showroom after the subsidy benefit provided by the FAME India on an electric vehicle. It priced INR 1.30 lakh on-road including insurance and others. As of now, these scooters are only available in Bangalore as it is the only city blessed with EV charging infrastructure (Ather Grid). The pre-bookings for the scooter is open and buyers including Karnataka can book for the scooter. The other cities will also be availed by the scooter after the establishment of the Ather Grid.

Meanwhile, the i-Praise is tagged with the price tag of INR 1.15 lakh thanks to the subsidy benefit. Available at over 200+ authorised Okinawa dealers across the country, this Okinawa will cost INR 1.24 lakh, on-road Bengaluru as claimed by the dealers.

In a country like India, where scooters are considered as a convenient and practical offering. The i-Praise will score better as compared to Ather scooters as the former is not only fuel efficient but also offers outstanding performer on the go. The price tag, however, can raise arguments as we usually don't see scooters with such premium price chit. However, the tech and quality are being offered with both these scooters are unlikely to find in others in the segment.