Pune, the city where overtaking, loud honking, breaking traffic signals and violation of every traffic rule, on roads is the daily routine like any other city. Deputy Commissioner of Police (Traffic) Tejaswi Satpute held a simple experiment in order to convey such an awaring message.

In the experiment took place on Tuesday morning at 10 am, the Pune Police instructed two volunteers from the traffic police to ride two bikes with pillion rider from Katraj to Shivajinagar. While the used bikes were of the same brand. 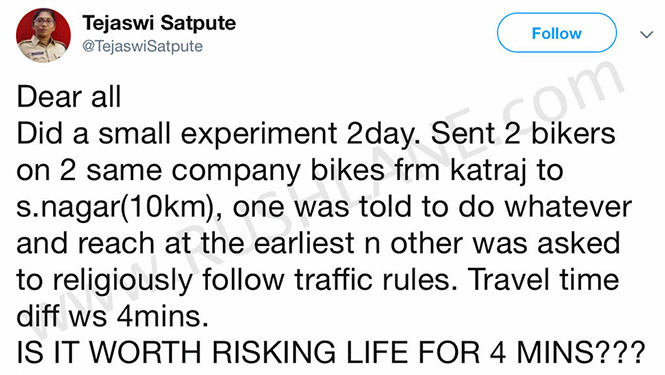 Read also: 63 Traffic Safety Signs and Their Meanings in India

On this, Satpute tweeted the conclusion of an experiment by saying that was a life worth the risk for a mere 4 minutes? The tweet went viral and retweeted by the Ahmedabad Police. With the retweets over 5,700 and over 11,000 likes, the tweet received a lot of attention.

It was a lesson for those who think the time is of importance and put his life in danger with rush driving, overspeeding, overtaking and all. If you follow traffic rules strictly, you will reach to your destination more to more 5-7 minutes delay as against to one not obey traffic rules, plus it gives the surety of life.