In the Delhi Auto Expo, Mahindra & Mahindra introduced its new offering in the SUV segment san any name for the flagship offering. However, the model on display bore a striking resemblance to the SsangYong G4 Rexton which the fourth largest automobile maker in South Korea and is currently owned by Mahindra. The power meets luxury SUV will go up against Toyota Fortuner and Ford Endeavour.

Recently leaked images prove that the soon to be christened SUV is ideal for all terrains and an ideal successor to the throne to The Toyota Fortuner in the premium luxury SUV segment. As per the leaked images, the SUV is currently proving its immunity to scorching heated terrains before its much-awaited festive launch.

Putting an end to all rumors that suggest that the SUV would be called either XUV700 or simply Mahindra Rexton, it has been learned that the flagship SUV will bear an all-new alphanumeric name. The new SUV will carry Mahindra's design footprints that include Chrome touched Toothy upfront grille with signature Mahindra logo right at the center. Further, the SUV will carry updated suspension and handling package. It will also inherit Mahindra’s ground clearance. The tweaks are meant to make the Korean model better suited for variable Indian conditions.

Under the hood, the muscle SUV will be powered by a 2.2-litre diesel engine that develops 187 hp of power and 420 Nm of torque mated to a seven-speed torque-converter automatic gearbox. 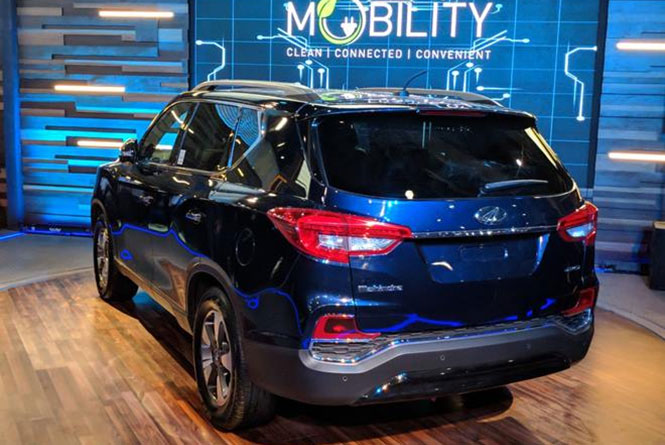 With a whopping price tag in the range of Rs 28 to Rs 35 lakh, the New Mahindra SUV sports an easy to the eye boxy design. Whereas the heavy bumpers and wrap-around headlamps add muscularity to the overall appeal, the black body claddings render an off-road look to the SUV with new eye-catching character sidelines and thick C-pillars.

As far as passenger comfort is considered, Mahindra's new 7-seat SUV electronically cooled seats adorned with Nappa leather upholstery. The cabin further boasts of a premium dual-tone dashboard with black and brown finish. In terms of technology, the SUV gets a 9.2-inch HD touchscreen with Android Auto and Apple CarPlay, a 7.0-inch LCD instrument cluster as well as smart tailgates.