After releasing a short video clip of the all new saloon named 'Talisman', the automaker Renault has revealed full details and specifications of the model. This upcoming saloon will be replacing Renault's Laguna model. It is an innovative and modern sedan and at the same time carries a fuel efficient engine. The all new Talisman will be available in five trims including diesel and petrol variants. The petrol models include- TCe 150 and TCe 200 while the diesel models include DCi 110, 130 and 160.

The exterior of this new sedan features a V-shapes grille with chromed highlights and C-shaped LED daytime running lights. It also carries LED headlamps and LED tail lights. The lower fascia is neatly chromed and houses fog lamps and the rear bumper sports large exhaust tips. Dimensionally, it measures 4.85 meters in length, 1.87 meters in width and 1.46 meters in height along with a wheelbase of 2.81 meters. 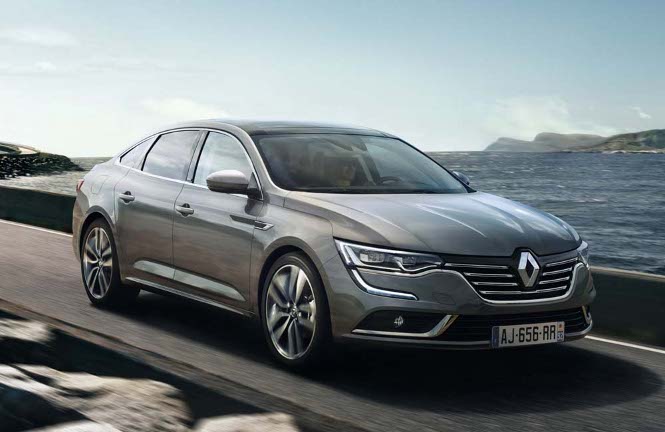 Inside the cabin, the seats are covered in dual-tone leather material along with a wooden and silver trimming. There is an infotainment system with an 8.7 inch touchscreen facility and a heads-up display providing important information without obstructing the driver's view. The spacious storage facility enables the model to carry a boot capacity of 608 litres.

The petrol variants TCe 150 and TCe 200 produce a power of 148 Bhp and 197 Bhp respectively. This engine is mated to a seven-speed automatic dual clutch transmission system. On the other hand the diesel variants DCi 110, 130 and 160 generate a power of 109Bhp, 128Bhp and 158Bhp respectively. In the diesel variants, there is either a six-speed manual gearbox or a six-speed automatic dual clutch transmission system.

It has been confirmed by Renault that no right hand drive version of the upcoming Talisman will be manufactured. Thus, countries like India, U.K. and South Africa will not be able to enjoy a drive in this sedan. The official debut of this upcoming sedan will take place in September, 2015 at Frankfurt Auto Show. After this, the model will arrive in the European market in early 2016, followed by its launch in Turkey and North America.