A Royal Enfield Classic 500 Scrambler prototype was spied earlier at a dealership in June 2018. It is anticipated to be an official model to join the brand’s lineup in coming future. Lately, a test mule for the same was seen supposedly performing test runs on roads in Pune.

From the available images online, the Classic 500 Scrambler appears equipped with a new upswept exhaust unit, knobby off-road tyres and telescopic forks with rubber gaiters to prevent dwelling of sand and dust. Additionally, minimal fenders at the front and the rear simply showcases the scrambler characteristics of the motorcycle. 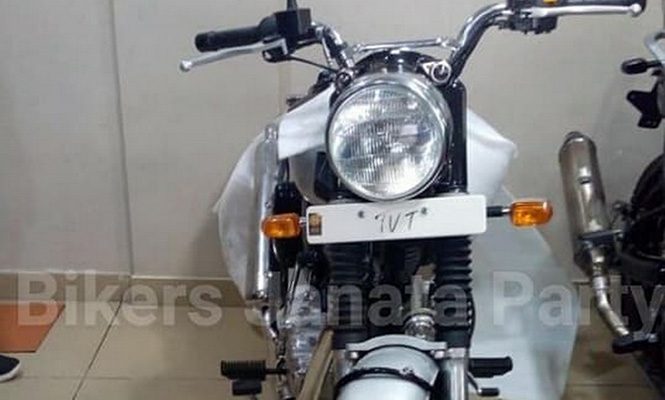 Other than this, the features which get a special attention of the onlookers includes a raised handlebar with a centre brace and a rear parcel pack instead of a pillion seat. The ABS is also an expected cycle part from the surfaced images.

Mechanically, we did not find there will be any alterations. Though we can expect a sort of adjustments made using sprocket sizes or gearing ratios. Whereas, the 499cc, single-cylinder, air-cooled motor will continue to power the motorcycle with the churned output of 27.5 PS and a peak torque of 41.3 Nm. The power transmission, on the other hand, will be handled via a mated 5-speed gearbox.

Here in India, priced to be around INR 1.89 lakhs (ex-showroom, Delhi), the Royal Enfield Classic 500 Scrambler will be launched in early 2019. Whenever it will mark its presence at the brand’s dealerships, it will be packed with going to be mandatory ABS feature as standard by April 2019