At the impending Auto Expo in early next month, the prominent motorcycle manufacturer from Japan is all geared to put an array of 17 motorcycles to showcase at its stand in Hall No. 2. These 17 models will include a variety of products belonging from different categories such as the brand’s Indian portfolio, new CKD motorcycles, dirt bikes, the upcoming Burgman Street scooter and the GSX-RR-Suzuki’s Ecstar MotoGP race bike.

Other than this, the Expo will be the platform to fulfil the brand’s earlier made announcement of introducing two new products every year. The models which are likely to make their appearance at the event will be the new Burgman Street, a premium scooter and a CKD motorcycle. Developed for the Indian market, the details for this Suzuki scooter are not revealed by the automaker yet. Though the chances are it could borrow the 125cc engine from the Access 125. Moreover, a thought also makes us that the Burgman Street could be loaded with a new 150cc, specially manufactured engine. As of now, only the Aprilia SR150 and the Vespa 150 are using the 150cc engine in the Indian industry.

For the new CKD motorcycle, the fact that is clear to a great extent is it will be Suzuki’s first sub-1000cc big bike for India. Else, the V-Strom 650 and the GSX-S750 are the two monikers belonging to the adventure and naked sports segment respectively could be rolled out at the Auto Expo. The V-Strom is powered by a 645cc V-twin engine that churns out 71hp of maximum power while, the GSX-S750 uses an inline, four-cylinder engine with the displacement of 749cc that spits out 114hp. 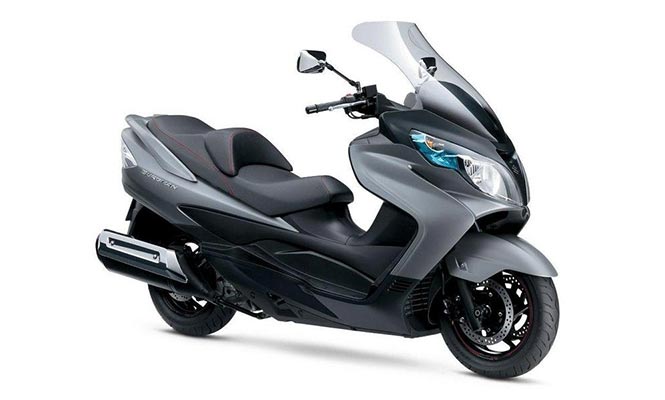 If the pricing of the models is concerned, the V-Strom is likely to be tagged with a costlier price tag than the Kawasaki Versys 650. While expected to get the price tag almost similar to the Kawasaki Z900, the Suzuki GSX-S750 could undercut the market of the former one with similar performance. Other than this, the advanced feature of traction control is also on offer on the GSX-S750 that misses out on the Z900. we can expect, the premiere to both the bikes at the Expo, though the chances are only one launch and the other one scheduled to roll out later this year.

The host of other Suzuki models which could be showcased along with the Indian lineup will comprise the Ecstar Moto GP race bike, the 2018 Suzuki RM-Z450, the 2018 RM-Z250, the 2018 DR-Z70, the GSX-RR, the Gixxer Cup racing model and a number of motocross variants at the podium.