New Suzuki Katana to Debut on October 2 at INTERMOT 2018

An expected sports tourer that is slated to debut globally at the upcoming INTERMOT 2018 in Cologne on October 2, has been teased via the Japanese bike maker in a series of teaser videos. Well, the two out of three videos were not being able to share details to par. Albeit this new teaser video is revealing the fuel tank that looks like one seen on the 2017 concept bike (based on the GSX-S1000F) at EICMA 2017. It is official unveiling at the INTERMOT 2018 on October 2.

Historically, Katana is a traditional hand forged Japanese sword used by the samurai and feudal Japan. With the tagline, “feel the edge” video showcases the same. Somewhere it hints the resurrection of Katana nameplate for which the brand has filed the patent in the US along with a Japanese character mark and a sword logo on February 8, 2018. 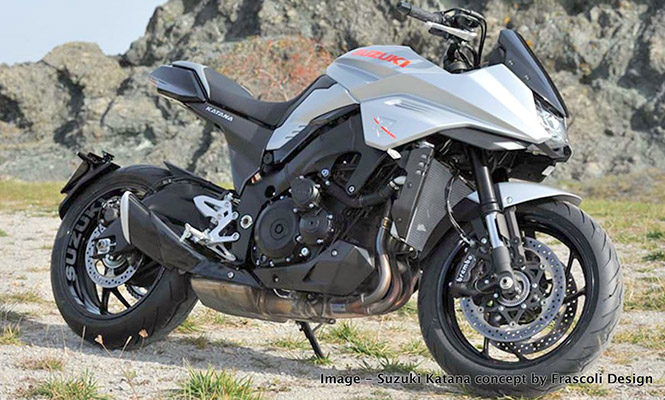 The nameplate Katana, was in existence in the 70s for the semi-faired sport-touring motorcycles, first designed by German company Target Design. That time, the automaker used Katana branding for producing several models with different displacements like the 550cc, 650cc, 750cc and 1,100cc. Out of which, the 1,100cc displacement Katana was highly popular among the market.

The mechanical details for the upcoming Katana are unclear. Rumours suggest, a turbocharged engine powered motorcycle which could get the factory title of the GSX700T, that will be the next motorcycle to hit the production line. We could the same under the Katana nameplate.

That’s all about one of much-hyped moniker from the giant Japanese automaker, Suzuki’s stable. To know more, stay connected with us.