Started 3 days ago on the 3rd of February, the epic Moto Event now enters its fourth day with the same passion and zest as we've seen on day 1. While various new launches created a fairly nice decorum at the show and indeed maintained their brand's goodwill on top, the Japanese two-wheeler maker, Suzuki, amused a bit extra with its fascinating product line-up from the rest ones. Have a look over the coverage of Suzuki Motorcycles at the 2016 Delhi Auto Expo. 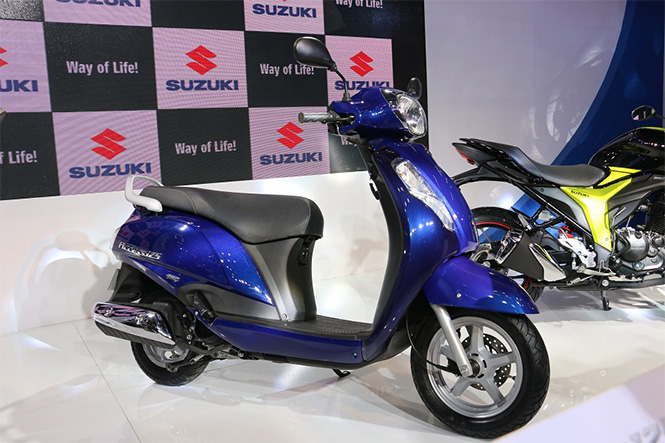 Access 125 is a completely re-engineered new scooter from the manufacturer. From chassis to the engine, everything in this vehicle has gone for a rework. Other from mechanicals, the cosmetic upgradations are too a lot more different than what we noticed on other scooters around. It features a single push starter, allow wheels and disc brakes as an option, telescopic forks, 21 litres fuel tank capacity, an optional DC socket and a cubicle nook behind the front case. The engine now makes an excellent power of 8.7PS and a peak torque of 10.2NM. 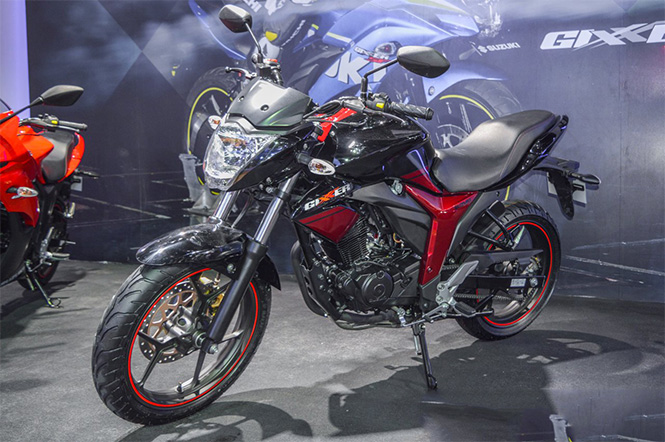 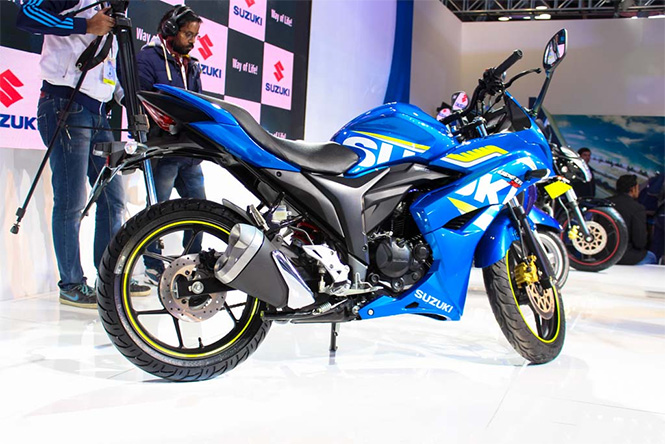 Suzuki reintroduced the updated Gixxer and Gixxer SF with rear disc brake as an option. Both the bikes are believed to be the fortuners for the Japanese brand as they are the most anticipated machines that brought record numbers for the company. The Fi updated version gets the same 155cc engine that was there in Gixxer. Alongside this, SF will be having a 240mm rear disc option. The fuel injected variant will be available in the Gixxer SF MotoGP Edition. A standard rear disc is now available in the entire range. New color option for the updated machine is Metallic Lush Green with Glass sparkle black tone, while the SF version has got Candy Antares red/ Glass sparkle black tone. 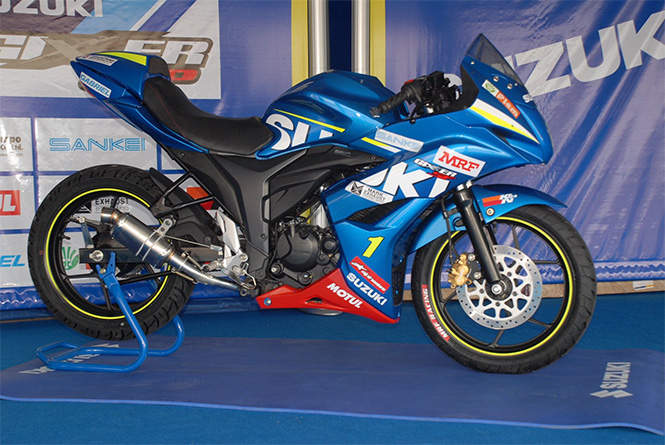 Just like Gixxer and Gixxer SF have reinvented their sections appropriately, Suzuki did the same with the Gixxer Cup. As the brand has been having a successful motorcycle racing background from like years, this time it is going to be for the Indian enthusiasts to feel the sporting spirit. The 155cc Tourer churns out 14.8BHP of power and 14NM of torque. 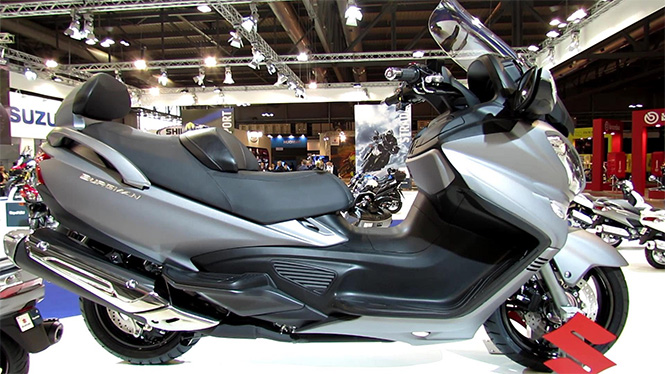 Suzuki showcased Burgaman 650 on the booth, a Completely Built Unit (CBU) on which the company has been working upon. As of now, nothing is confirmed. For the brand, it becomes important to put the vehicle at a good price point so that it can stand over the heavy duty competitions in the scooter market segment. At a glance, the scooter appears very sturdy, having a very car-like IC. Braking duties are being taken care by disc brakes at the front along with ABS. 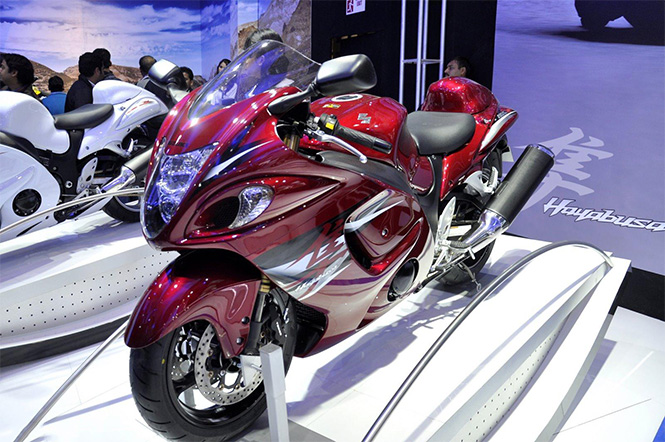 The much awaited Suzuki Hayabusa has been unveiled at the 2016 Indian Auto Expo. For all the enthusiast bikers, the wait was worth as it looked stunningly athletic when grounded on the floor. The motorcycle has been revised with various features including outstanding control on the corners, impressive riding and handling and remarkable suspension setup. Powering the Hayabusa is a 1340cc in-line 4-cylinder fuel-injected engine, which delivers the maximum amount of torque for deliberate acceleration. 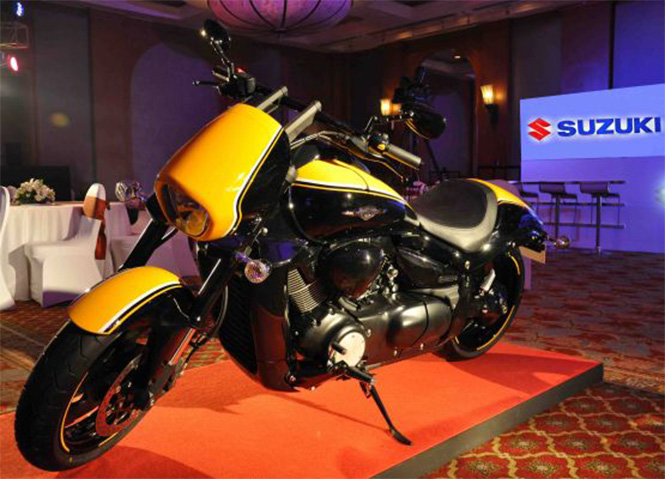 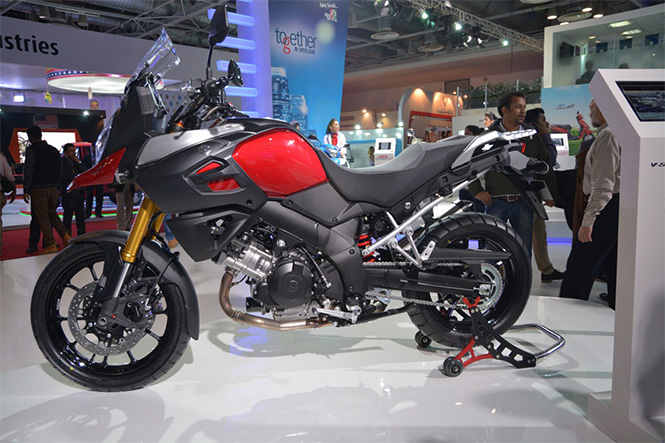 Suzuki V-Storm 1000 was also on a display apart from the aforementioned bikes. The muscular middle-weight sports Tourer is powered by a 645cc V-Twin engine, a compact radiator and a six-speed transmission along with an anti-lock braking system (ABS). Besides this, the perceptible features include a high mounted adjustable windscreen, a roomy seat, an analog tachometer and a broader exhaust pipe. 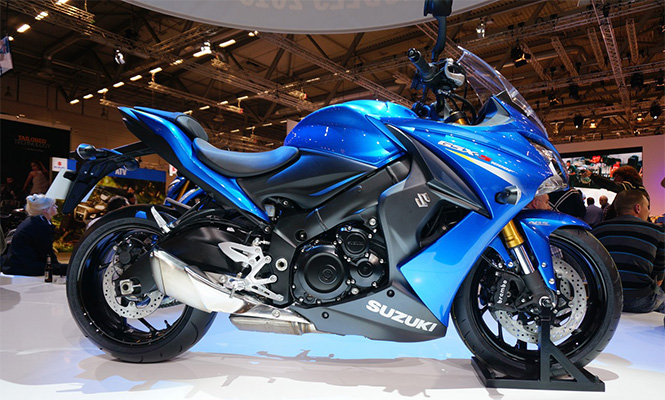 Equipped with a more powerful engine, the Suzuki GSX- S1000F is acquired from the legendary, championship-winning GSX- R1000. The bike was exhibited at the Auto Expo with the rest of the charms. A powerful 999cc 4-stroke 4-cylinder liquid-cooled, DOHC engine produces 143BHP of power mated to six-speed constant mesh transmission. 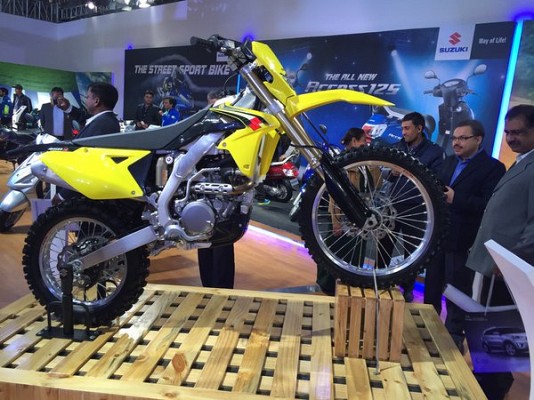 After passing two big days of auto event, the Japanese automaker Suzuki unveils a new product, an off-road motorcycle, titled as Suzuki Off Roader King. The launch date for this off-road Tourer has not been revealed yet. Painted in all glossy yellow, the roadster thoroughly impressed with its peppy looks. Exterior bits include a higher placed front mudguard, long travel front USD suspension, multi spoke wheels, upright handlebar, flat seat and underbelly exhaust. No details about the power figures has been out yet.