Tata Altroz which was showcased at the 2019 Geneva Motor Show, is going through the rounds of internet with spied images. Also the said Tata Altroz was spotted at the Tata Assembly factory in a production version hinting at near launch, may be in next month itself. Inspired from the seabird ‘Albatross’, the Altroz premium hatchback is claimed to offer agility, speed, and efficiency along with best-in-class performance and in-cabin space. It is the brand’s first car which is based on the new ALFA (Agile Light Flexible Advanced) modular platform. Also, when launched, it will be the biggest premium hatchback in the segment in India.

The Tata Altroz is finished with an all-black interior scheme with piano black and silver accents. It gets a large free-standing touchscreen infotainment system positioned above the T-shaped centre console and dual ultra slim LED headlamps. This touchscreen infotainment will be compatible with Android Auto and Apple CarPlay. It ensures to offer ‘segment leading’ human-machine interface screens. Other features include multi-functional flat-bottom steering, rear air-con vents, automatic climate control, etc. for the safety concerned there are dual front airbags, ABS with EBS, rear parking sensors and ISOFIX child seat mounts as standard in India. 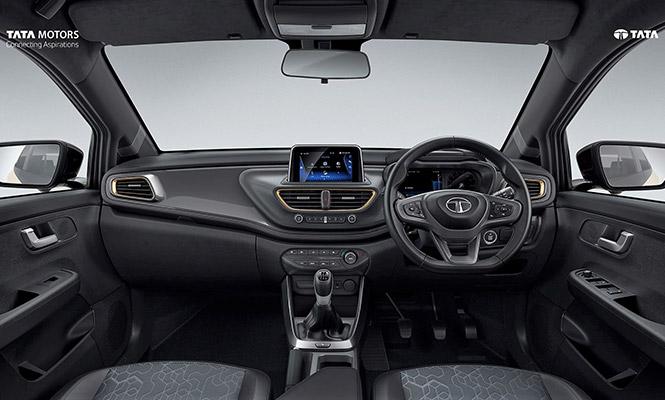 The Tata Altroz will be equipped with dual ultra slim LED headlamps & a slimmer prominent 3D ‘Humanity Line’ grille. The setup of the two will be similar to the one offered in the recently launched Tata Harrier SUV.

It is assembled with projector headlamps with integrated LED daytime running lights and a fog lamp assembly with a new ‘tri-arrow’ pattern.

The hatchback features strong fenders, upswept beltline, flared wheel arches and a raked roofline that tapers sharply to the rear and a C-pillar mounted rear door handle, as witnessed in the third-gen Maruti Suzuki Swift.

The rear of the Altroz is furnished with wraparound LED tail lamps with a smoked finish and a large windscreen with an integrated spoiler. The tail lamp designs are like it neatly bifurcates the upper and lower section of the rear profile. In addition to this, the boot lid is engraved with big ‘ALTROZ’ lettering. 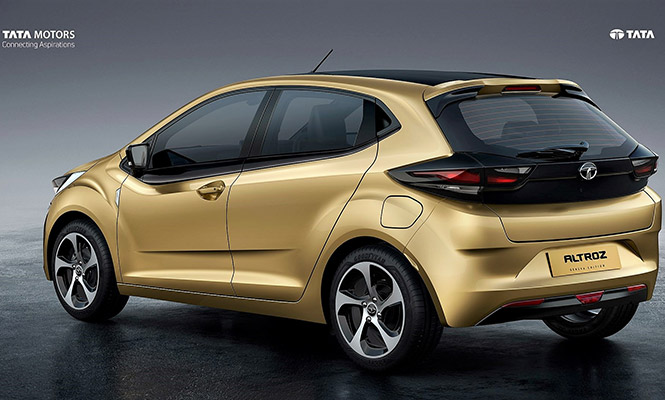 Under the hood, the hatchback is more likely to get the Nexon’s 1.2-litre turbocharged petrol engine. The said powertrain is capable of generating 110bhp and transmitting 175Nm of torque to propel the car. As of now, it is not clear that Tata would offer Altroz with a diesel engine or not? While at the transmission front, we expect a 5-speed manual unit as standard and AMT could be on offer as an option. Not even this, A pure electric version of the Altroz is also on the cards of carmaker by 2020 which is rated to convey the travel range of approx 300km in a single charge.

To stand above Tiago, the Tata Altroz will make the brand’s entry in the B+ segment. Expected to tag with the price tag around INR 5.5 lakh to Rs 8.5 lakh, the premium hatchback will hit the country in mid-2019. In the segment, it will take combat with the rivals like Maruti Baleno, Hyundai Elite i20, Honda Jazz and Volkswagen Polo.