The all-new Toyota Camry Hybrid got launched in India at an introductory price of Rs 36.95 lakh(ex-showroom, India). The model launched prior to this, was the previous-gen Camry Hybrid which was brought to the market with an ex-showroom price Rs 37.38 lakh in Delhi.

TNGA, the Toyota New Global Architecture platform has provided a strong platform to the newly launched ‘new Camry Hybrid’ and has made possible to facilitate the model with a lower centre of gravity and improved vehicle dynamics.

The new Camry comes with only a hybrid powertrain. The Model is powered by a 2.5-litre petrol motor which could produce a torque of 178hp and 221Nm and is paired with a 120hp electric motor under the hood. When we talk about the total system output, it is 218hp and the wheels are powered via a CVT automatic transmission gearbox. The Toyota Camry Hybrid follows the brand’s latest hybrid system, comprised of a lighter power control unit. The battery in the Car has been placed under the rear seat, which according to Toyota increases the efficiency of the system. In terms of Emissions and fuel consumptions, the tested new car returns 23.27kpl. 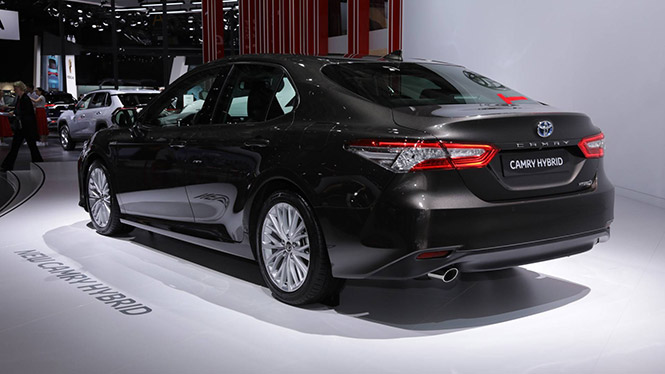 The other equipment offered to the new Camry by Toyota includes:

Taking care of the safety, the car is offered with nine airbags, ABS and EBD, traction and stability control, and also Isofix child seat anchor points.

Toyota after the new Camry has its sights now set on the Honda Accord Hybrid, the only other hybrid in the segment namely the Volkswagen Passat and the Skoda Superb.