Power cruiser from legendary British automaker, Triumph Motorcycles, the Rocket III, with having biggest engine in production i.e. 2294cc,inline-three cylinder unit has been eliminated from the product lineup. It created a void in the Triumph’s international models portfolio. As per the photos leaked from an international dealership meet, the brand is ready to fill the gap with the emergence of 2019 model year version of the Rocket III. The 2019 Rocket III is under pipeline and expected to debut globally sometimes next year.

At the mechanicals, the 2019 Rocket III will be an improved version with the more powerful-newly built or refined version of the earlier engine with displacement rumoured around 2500cc. Whatever it will be, it’s sure to develop more power and torque as compared to churn 146bhp and torque of 221NM of the predecessor. Nearabout the max churn of biggest rival Ducati Diavel 1260 at 157bhp. 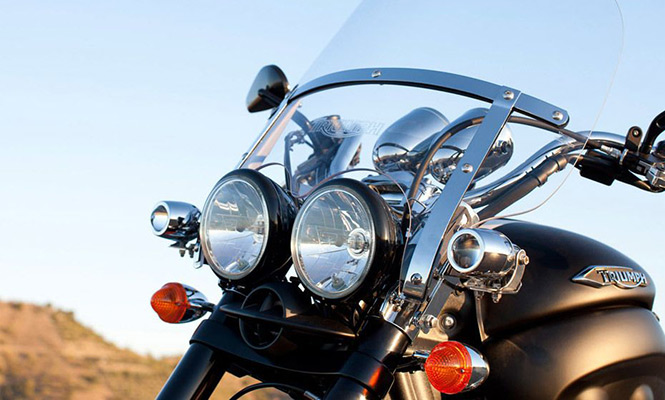 In terms of body language, the 2019 Triumph Rocket III will be a power cruiser with laid-back cruiser skin. While the riding position will be upright yet aggressive sported by a conventionally set handlebar and foot pegs. Meanwhile, the front fascia gets twin headlamps setup from the last model, the rear gets shorter and the pillion seat, higher. The sporty, stubby twin exhaust setup completes the appeal of the bike that ends right behind the foot pegs.

At the rear end, the bike got suspended over a single-sided swingarm and a rear monoshock developed according to the newly built chassis. Also, there are rumours that the 2019 Rocket III trim will be lightweight as compared to predecessor’s monstrous 367kg kerb weight.

The unveiling of the 2019 Triumph Rocket III is expected sometime early next year. Whereas, it’s arrival to the Indian shores can be anticipated by late 2019.

Get to Know About Newly Launched Triumph Scrambler 1200 XC
Views: 1785