Triumph Motorcycles India has launched the 2019 model year version of its existing modern classics in Indian lineup, the Street Scrambler and the Street Twin. The former attracts the price sticker of INR 8.55 lakh while the later is available to retail at INR 7.45 lakh. Both the prices are applicable at authorised dealerships. Desirables can book their choice at the token amount of INR 50,000 while the deliveries against bookings will commence from the first week of March.

Both the models have got updated comprehensively for the new year not even at the cosmetic but also at mechanical and electronic front. At the skin, they got a new 'Triumph' logo on the fuel tank and a host of redesigned components including side panels, headlamp bracket, front fender and much more. The 2019 Street Twin has now become more focused and comfortable, thanks to increased saddle height of 760mm.

In addition to this, the underpinnings have also witnessed a sort of improvements in the form of suspension and braking setups. The front now receives new cartridge-type front forks with up to 120 mm of travel while the rear continues with same KYB twin shock absorbers. The two-piston units at the front have been replaced by the 310mm Nissin four-piston callipers. At the back, the 2019 Triumph Street Scrambler gets the same 255mm disc with a Nissin calliper and the 2019 Street Twin’s rear disc has been decreased to 220mm from 255mm. 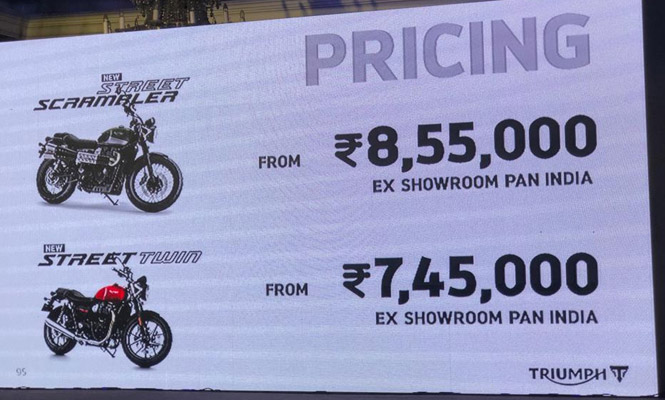 Other than this, the new Street Scrambler gets a wider 835 mm handlebar while the Street Twin now rides on new alloy wheels measuring 18-inch at the front and 17-inch at the rear. The shod up rubber on both the Scrambler and Street Twin models are dual purpose and meant for on-road respectively.

They have 900cc parallel-twin which churns out 65PS of maximum power instead of 55PS and 80 Nm of maximum torque is the same. The powertrain on the 2019 models gets a magnesium case, lighter crankshaft, lighter clutch and a balancer shaft. Both the bikes will now come with two riding modes- Rain and Road while the off-road is a new mode for the Street Scrambler. The switchable traction control and ABS is carried forward as it is from the older versions.

The Street Twin will not compete with anyone as it does not have any rivals in India but the Street Scrambler will compete with the Ducati Scrambler which costs Rs 6.78 lakh (ex-showroom) (for the Icon Red).