The German carmaker, Volkswagen has ultimately unveiled the all-new T-Roc crossover at a special event near Lake Como in Italy. The T-Roc which is an entry-level crossover from the manufacturer is being called a ‘compact-class crossover’.

Apparently, the T-Roc is following the similar conservative approach of the Volkswagen Tiguan, as in the forthcoming the styling is subtle with well laid-out proportions. The front fascia gets a wide hexagonal grille, flanked by sleek wrap-around headlights. The bumper gets a bigger air intake with LED DRLs on either sides and a contrasting skid plate underneath. 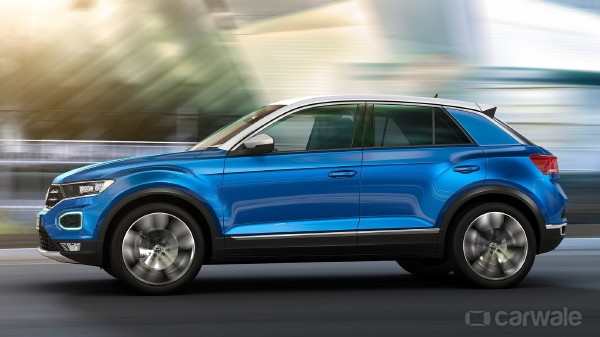 The fog lamps are placed way below in the black cladding. The bonnet and grille meet is in similar manner as in the Tiguan and in the next-gen Touareg, as revealed through the spy photos. The thin chrome line running below the grille and headlamps adds character to the front fascia.

The black cladding on the side around the wheel arches and on the side skirts. The T-Roc conveys a floating roof-design which can be had in a dual-tone paint job (optional). The C-pillar has been raked to lend the five-seater a stylish crossover-coupe appeal. One distinguishing styling component is a chrome insert running from the A-pillar, over the windows and ending at the outline of the C-pillar. 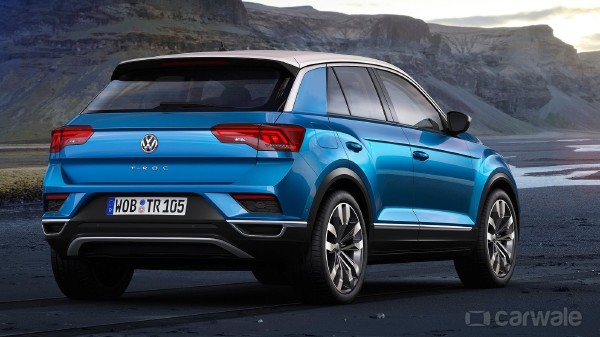 The same subtle approach proceeds at the rear. The wrap-around tail lights stretches over the tailgate. The large bumper is festooned with black cladding and differentiating silver inserts to lend the SUV a strong appeal. Based on the shared MQB platform, the T-Roc measures 4234 mm in length, 1819 mm in height and 1573 mm in width. The wheelbase is 2603 mm.

On the inside, the cabin is identical to other Volkswagens. The contrasting colour dashboard is similar to the one appeared on the new-generation Polo. The steering is a flat bottom unit. A large infotainment screen governs the dashboard and offers all the connectivity options. The boot space has the 445 litres capacity, which can further be extended up to 1290 litres. 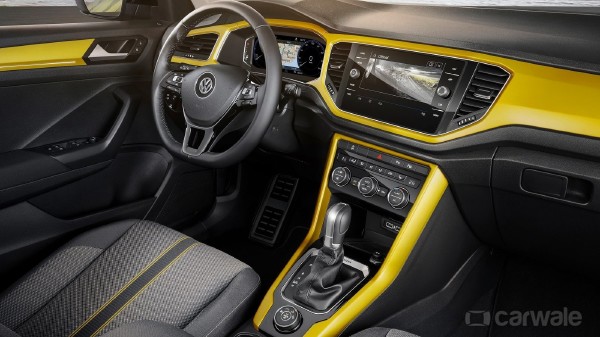 Available in the three trims of standard, style and sport, the T-Roc will be offered with five turbocharged engines. There will be three petrol and two diesels unit. The gearbox transmission from both the six-speed manual or seven-speed dual shift automatic gearbox, will depend on the engines. The front wheel drive layout will be a standard configuration while, a 4Motion four-wheel-drive configuration will be an optional offering. A host of driving aids and safety features will be standard in the T-Roc.

In the German market, the T-Roc has been priced at €20,000. While, the sales will start in Europe this November. In terms of rivalry, the crossover will go in competition with Nissan Qashqai, Toyota CH-R, Seat Ateca, and the newly-introduced Skoda Karoq.