Yamaha FZS recently entered to its third generation with 2019 calendar year updates. The 2019 FZ V3 comes packed with a single channel ABS unit. The feature going to be a mandatory fitment from April 2019. In the 150cc-160cc segment, the Japanese naked streetfighter goes in competition with the rivals the Honda CB Hornet 160R ABS, Suzuki Gixxer ABS, and TVS Apache RTR 160 4V and the Bajaj Pulsar NS 160 as well. The latter two are due for an ABS update. Other than the ABS, the new FZS V3 comes packed with features like the LED headlight and rear disc brake as standard fitment. In terms of pricing, the Yamaha FZS V3 ABS costs INR 10,000 premium over the Suzuki Gixxer. While the Honda CB Hornet without ABS is dearer over the other rivals.

The new Yamaha FZS that is 4kg heavier than the last generation model has the difference in power used from both the bikes. Among all these rivals in the segment, the Apache RTR 160 4V is the most powerful and the new Yamaha FZS V3 is the least powerful one with 13.2PS of churned power from the 149cc motor. The FZS mill comes associated with fuel injection system while the other in comparison Honda CB Hornet 160R uses carburettor system for all of its variants. Have a quick look at the comparison of these models on paper specs. 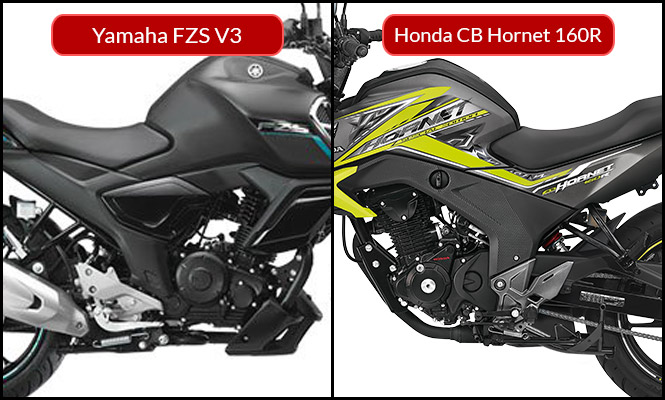 Based on a Diamond frame, the 2019 FZS V3 is powered by a 149cc, single-cylinder, air-cooled, FI engine. The engine is rated to develop 13.2PS and transmitting 12.8Nm of peak torque to the rear wheel via an associated five-speed gearbox. The engine can make the bike attain the top speed of 109 kmph and returning the fuel efficiency of 40-50 kmpl. These are not exact figures and lie around the magnitude define here

The Honda CB Hornet 160R, on the other hand, is propelled via a loaded single-cylinder, air-cooled, carb engine with an engine displacement of 162.71cc. This slightly bigger powertrain as compared to the FZS V3 pumps out 14.9hp and 14.5Nm respectively. The power transmission is handled via a mated 5-speed gearbox. The claimed top speed and fuel mileage from this powertrain is around 110kmph and 40-50kmpl respectively. 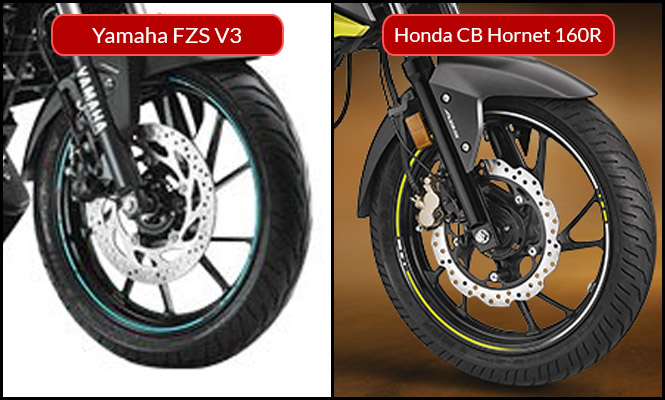 On the suspension front, both the bikes New Yamaha FZS V3 and the Honda CB Hornet 160R come equipped with the conventional telescopic fork up front and monoshock at the rear. While for the brakes, the former gets a larger 282mm disc up front and 220mm disc at the rear wheel. The CB Hornet 160R meanwhile uses a 276mm and a 220mm units at the front and rear wheel respectively. The single-channel ABS is a standard fitment for both the bikes now.