The three-wheeled commuter, Tricity 155 from the Japanese bike maker, Yamaha Motor Corporation has been unveiled and it is ready to make its debut in the European market in the September month of this year. After then it could mark its entry to the motoring mart of Japan, Asia and other countries. The Tricity uses the Leaning Multi Wheel (LMW) technology to give a better stability and confidence on corners through providing tilts to the front wheels.

Design wise, it has been sculpted well with better ergonomics and dimensions to facilitate the rider. The facilities include extended floorboard for more space, under seat 23.5 litres of storage space with an accessories division which keeps an electronic gadgets charging socket. Moreover, it comes with the manageable seat height of 750mm and with the LED headlight, tail lights and position lights also. 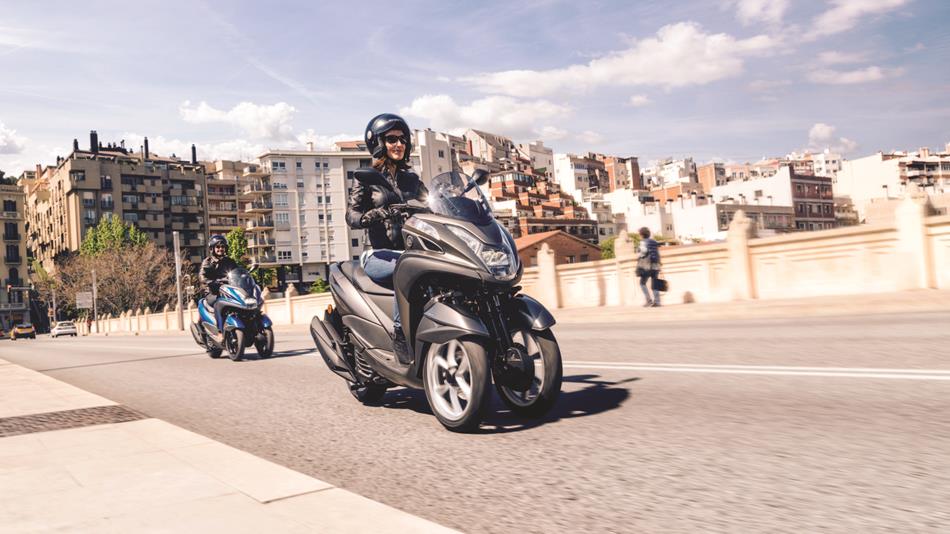 Crafted on an all new chassis, Yamaha Tricity 155 boasts a single cylinder, liquid-cooled, four-stroke, four-valve engine with the displacement space of 155cc. The four stroke engine is capable to power the Tricity from the churns output figures of 15 PS at 8,000 revs and 14.1Nm at 6,000. The whole setup is in partnership with a V-belt automatic transmission. And it also has the trust of Blue Core technology which provides excellent performance and improved performance to the vehicle.

Apart from this, the Tricity 155 features a cutting edge suspension setup and brakes capabilities for rider’s aid. The suspension setup comprises a telescopic front forks and rear dual shocks. Dual disc of measure 220mm on the front wheels and single disc unit of 230mm on to the rear wheel works with the specialised combined braking system (Unified Braking System) with ABS as standard.

The younger sibling of Tricity 155 with slight lesser capacity, Tricity 125 is already available in Thailand and other markets and it will be produced at the Thai arm of Yamaha to cater the global audience. For now, there is no sign of the coming of the Tricity 155 in the Indian market and we can only hope for positive.