The homegrown mobile manufacturer Spice has unpacked two new tablets for Indian market which have luring capabilities. MI-730 and MI-710 are two devices which are going to spread their glory on Indian soil with their excellence. Both devices have almost same features.

Both flaunt the same 7-inch display that offers 1024 x 600 pixels screen resolution. Both run on the same Android 4.4 KitKat platform. However, MI-730 tablet has voice calling feature which makes it quite appealing device to carry. A 1.3 GHz dual-core processor is loaded in device for boasting performance which gets the compliment from 512MB RAM which is not enough appreciable though, but go for a budget device.

Dual SIM support blesses this tablet with voice calling capability and the feature of 3G network connectivity is also there to enhance the result. On imaging front, it bears a 2MP rear snapper and a VGA imager. To function all of these features efficiently, a battery of 2800mAh capacity is packed inside the Spice MI-730. It is also integrated with 4GB inbuilt storage which can further be expandable upto 32GB via microSD card. 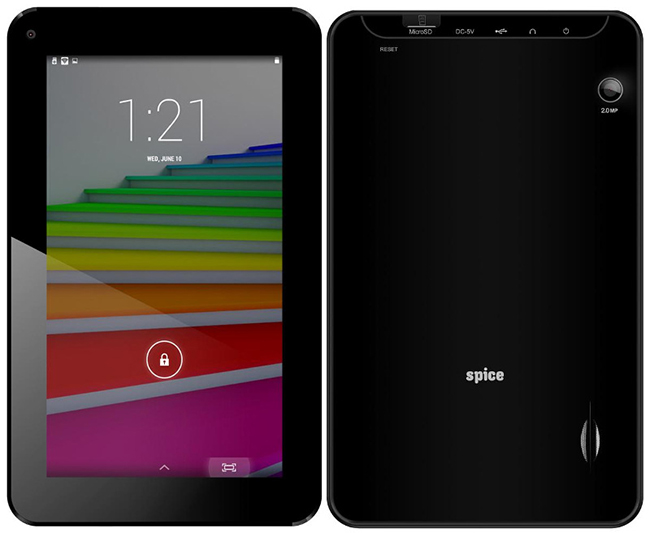 On the other side, the Spice MI-710 comes equipped with a more capable 1.3 GHz quad-core processor which is nice enough to enhance the performance spped of a budget device. 512MB RAM compliments this processor for smooth multitasking. For imaging purpose, company has crafted a 2MP rear shooter and 1.3MP front-facing shooter. User can access internet through Wi-Fi. Another option on connectivity front includes Bluetooth, and USB OTG. Spice MI-710 is backed by a 2800 mAh battery which is powerful enough to offer long time of battery backup to this tablet. You can pick this slate in Black color only which is priced at Rs. 3,999 while to pick the Spice MI-730 voice-calling tab, you will have to spend few more bucks as it is available at Rs. 4999.