Huawei sub-brand Honor launched its latest flagship smartphone Honor 9 lite in India on 17th January 2018 and it is available for purchase exclusively on Flipkart. Earlier this month, the company had revealed the launch date of the upcoming smartphone. Honor 9 Lite is the second smartphone which is being offered by Honor which comes with four camera setup: dual rear camera and dual front camera. The company already sent invites to media for the official launch of Honor 9 Lite that was scheduled on 17th January 2018 in New Delhi.

Recently, Honor 7X had been launched by Huawei in India and this month the latest flagship smartphone Honor View 10 is also available for purchase. When the Honor 9 Lite was launched in China, the company reported that it will be launched in more 14 countries including Russia, India and the UK. In the meantime, the Honor 9 Lite has been listed on Flipkart India website along with key features. The specifications of Honor 9 Lite Indian variants is almost similar to the China variant. Additionally, the company started a contest for fans in the country so that the larger number of people would attend the launch event. 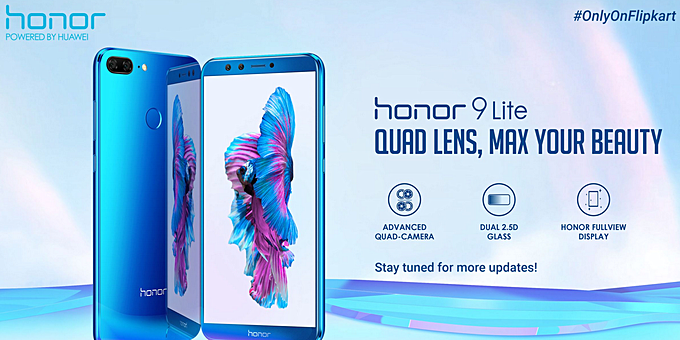 Honor 9 Lite operates on Android 8.0 Oreo and supports dual- sim. The smartphone has a 5.65 inch full HD plus IPS display and having a 1080 x 2160 pixels resolution and comes with an 18:9 aspect ratio. The smartphone is powered by a Huawei HiSilicon Kirin 659 octa-core SoC processor, in which four cores are clocked at 2.36GHz, and the remaining four cores are clocked at 1.7GHz.

As far as camera initiated, the Honor 9 Lite comes with dual rear and dual front camera set- up and having a 13-megapixel primary camera a 2-megapixel secondary camera on both the sides. However, the rear camera comes with features like auto LED flash and PDAF autofocus. It is available in two 32GB and 64GB internal storage capacity with an option to expand up to 256GB via micro SD card.

The Honor 9 Lite packs a 3000mAh battery and the company reported that it provides a talk time of up to 20 hours on 3G as well as stand up time up to 24 hours. The company says that the smartphone will be fully charged only in 2 hours 20 minutes.

The smartphone dimension measures at 151x71.9x7.6 mm and weighs 149 grams. From the connectivity board, the Honor 9 Lite has a 4G VoLTE, Wi-Fi 802.11 b/g/n, Bluetooth, GPS/ A-GPS, 3.5mm audio jack, and Micro-USB with OTG support. Sensor on the board, the smartphone include, ambient light sensor, accelerometer, magnetometer (digital compass), and proximity sensor.