Huawei Nexus marked up with Snapdragon 810 SoC and 3GB RAM

Nexus all around. The lovers are all set to purchase the flagship smartphones with the company's tag being offered. The company like Huawei and LG are upto the aim of providing the Nexus series smartphone to feature high specs with ultra fine and smooth platform powering Snapdragon processor for multitasking surface. With Google 29th September event line-up, the company has planned to out cast the two new launches.

The leaky figures quoted the launch of LG Nexus 5X and Huawei Nexus, to make the smartphones official with its launch. The highly featured devices are in trend and demand according to the market needs. The lovers wants the set to be launch soon with the event going to be procrastinated by Google. With the huge event in line and with other tech giants line-up events, the company like LG and Huawei are planning to place a benchmark in the market by providing its featured phones with a high processor backup as before. The internal support provided is also high sanctified with huge size RAM. 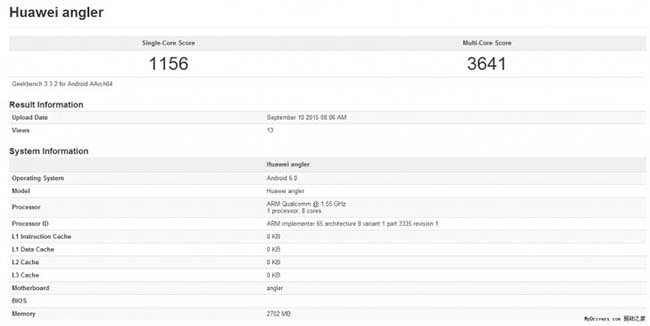 The paces of Geekbench thankfully reveals a few key specs, with a prototype being placed by someone. The Huawei Nexus sports Qualcomm Snapdragon 810 chipset, that is a high edge processor being placed newly this year with the official announcement. The highly figured phone lures the customer with 3GB of RAM support. It runs on Android 6.0 Marshmallow which is considered to be the newest in the market. With the launch of the two new handsets, the new Android platform will also get a place to be debuted.

As per the past rumors, the Nexus device will be having either a 5.5-inch or a 5.7-inch screen that too is sported with QHD resolution consisting of 1080p resolution. It is also expected to get a fingerprint scanner according to the trending demand and newly fashioned pace. The device also gets a USB Type-C port sanctified.

Android 6.0 Marshmallow Update Rolled out for HTC One M8
Views: 1425

Android 6.0 Marshmallows to be Available in Xiaomi Mi4 and Mi Note
Views: 2479