It has been roughly one month since Reliance Industries Chairman Mukesh Ambani had announced 4G featured Jio Phone. The Reliance company had unveiled the Jio Phone in its 40th Annual General Meeting at an affordable price just only Rs 1500. After a wait of roughly one month, Jio Phone booking process has started on Thursday for the general public. Reliance Jio reported that the aim of the company to sell nearly 100 million units of the phone in the initial year and approximately the similar units in the succeeding year. When Reliance started taking the pre-booking of the phone, servers of the Reliance Jio were crashed. Due to the server crashed, individuals were incapable to book the Jio Phone through MyJio App and the JioWebsite. For clarifying more further queries just read the information given below:-

For booking JioPhone, there are three options available- Jio website, the MyJio app and Authorised offline Jio retailers. To book the phone, users are required to provide the details such as phone number, pin code delivery address. At the time of booking, users will have to pay a Rs 500 and the remaining 1000 at the time of delivery. Once the booking process completed, users will get a voucher number that voucher number users can refer at the time of collecting the phone.

Can Users Book the JioPhone for a Friend?

When the User can Make the Full Payment of the Phone?
Users will have to pay a total of Rs 1500 which is a refundable security amount. Out of them Rs 500 as mentioned above, paid by users at the time of pre- booking the phone. The remaining Rs 1000 will be paid by the user at the time of collecting the phone.

How Many Units Can User Book?
At My JioApp and Jio.com website, as such, it is not mentioned that how many units of the phone can be booked (we went up to 30 units). Several units of Jio Phone can be booked with the same mobile number as well as pin-code and users are required to pay Rs 500 for per unit at the time of booking.

Can user Transfer His Booking to Anyone Else?
After booking the Jio 4G featured phone, if you don't want to purchase it, there is an option of transfer the booking to anyone else, by using the transfer option in the My Jio app which is available under Manage Bookings. Once the user enters the phone number and OTP, the user will be able to overview the Jio Phone bookings, there is information mentioned such as placed orders and number of units for each order. After this click on the Transfer Button which is mentioned above the Jio Phone banner and then the screen will move to a new window with an option to transfer the booking to anyone else.

You are required to furnish new user details such as new user number, new delivery Pincode and address, and the number of units you want to be transferred to anyone else ( in a case you booked more than one unit). The receiver will get text message instantly from the Jio company.

When will the Jio Phone Be Delivered at Doorstep?
Exact dates of delivery of the phone are not yet  disclosed by the company, however, the company said that the deliveries of the phone will start in the month of September. All users will be informed through text message and get the delivery schedule and details of the offline store. The aim of the company is to deliver nearly 5 million (50 lakh) units of the phone per week.

How much data will the user get with Jio Phone?
Reliance Jio is offering Rs 153 and Rs 309 primary packs to their users. Rs 153 pack gives 500 MB internet data at 4G speed, after the consumption of 500 MB data, the speed of the internet decreases to 128kbps. Additionally, users will also get 300 free SMS. Compatible to access Jio Apps such as Jio Cinema, Jio TV, Jio Music, and Jio Xpress News. All voice calls are free on the Jio Phone.

In Recharge pack of Rs 309, you will get the same benefit you are getting in Rs 153 pack, instead of 1GB data per day. If you want to use the Jio Phone- TV Cable known as JioMediaCable, which allows you to paly content on the phone directly on the big screen then you should purchase Rs 309 recharge pack. Rs 309 recharge pack will be available for sale only when the cable hits the market. Rs 24 and Rs 54 sachets packs are also available with the validity period of 2 days and 7 days respectively.

What are the Key features and Specifications of Jio Phone? 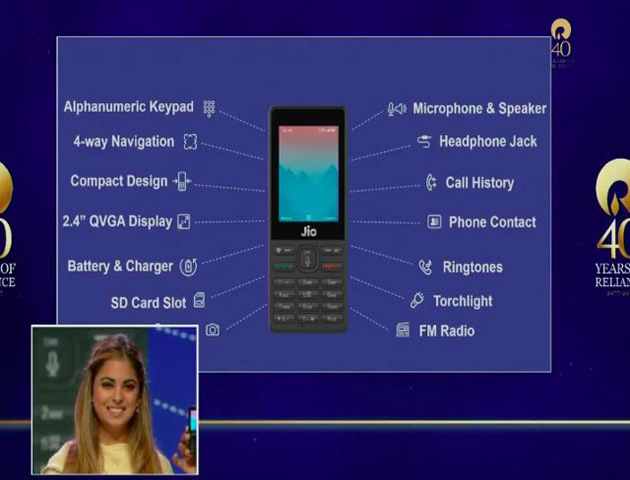 The JioPhone sports a 2.4-inch display along with 320x240 pixel resolution. The phone featured a dual-core 1.2GHz Spreadtrum SPRD 9820A/QC9805 processor and coupled with 512 MB RAM along with 4GB inbuilt storage that can be further extended up to 128GB via a microSD. In terms of optics, the phone comes up with the 22-megapixel rear camera as well as VGA front camera. It packs a 2000 mAh battery with the talk time of 12 hours. Bluetooth 4.1, Wi-Fi, USB 2.0 support, and 4G VoLTE are included in connectivity board. NFC for digital payments (software support will be added later) by the company. Flash light, alphanumeric keypad along with 4-way navigation button in the middle, FM Radio and headphone jack on the phone are some of the features of the JioPhone. The phone will also have Microsft Exchange support feature which enables the user to import contacts by syncing with the Google account. The company further added that some of the features will be released later through software updates.

Reliance Jiophone 3 To Come This Year With 5-inch Touchscreen
Views: 882