The hype for the world’s cheapest smartphone, Freedom 251 is slowly fading away with everyone waiting to see if Ringing Bells can really deliver a 3G smartphone at Rs 251. Customers were worried about sharing financial details to buy Rs 251 smartphone so the company has announced a ‘cash on delivery’ payment option. Ringing Bells revealed that almost seven crore phones have been registered, but only 50 lakh handsets will be sold, 25 lakh online and 25 lakh via offline channels. 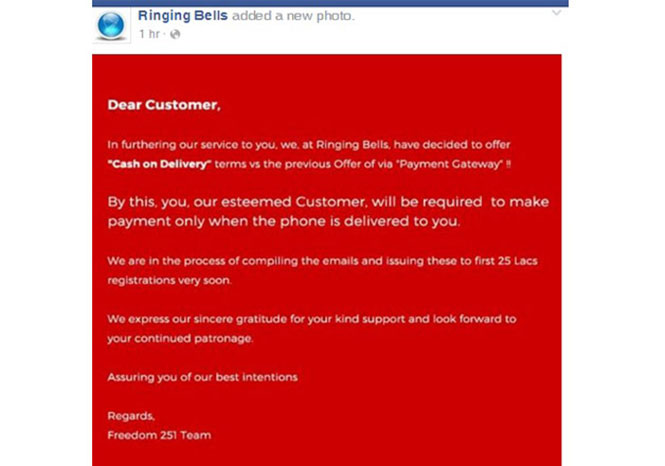 Ringing Bells has announced its cash on delivery payment option on its Facebook page, saying that it will only be available for the first 25 lakh people who registered for the Freedom 251 online. Now, a customer will only need to pay for the handset when it arrives at their doorsteps.

Ringing Bells is under a lot of pressure to deliver the smartphones as the telecom ministry has ordered investigations, considering a smartphone like this will cost a minimum of Rs 2,300. Ringing Bells director, however, had claimed that the company will make a profit of Rs 31 on each Freedom 251 unit sold. Union Minister Ravi Shankar Prasad had already warned the company that strict action will be taken if it failed to deliver the smartphone.

Earlier, the Noida-based manufacturing firm, Ringing Bells got the attention over the worldwide with the launching of its most affordable smartphone at Rs. 251 with impressive specifications and immense designing.

India’s contribution to global smartphone market might fall back to 9% (same as 2016)
Views: 9148