The Much-awaited, Xiaomi Redmi 2S Rumored to Debut on January 4

After heating up the cyberspace with numerous tidings, hotly-anticipated successor of Xiaomi Redmi 1S, called Redmi 2S has again come in headlines. First spotted by Gizmochina, this China based mobile maker has posted a teaser image on its Weibo account, which is suggesting about arrival of Redmi 2S on the 4th of January.

Glancing at poser image, wherein three women are holding different color of smartphones. To remind you, some pictures of company's new heir had been also emerged on Chinese Certification Agency: TENAA's website, which hold some resemblance with poster's mobile phone. Here, handsets' back panel as well as thin bezels are identical to listed images of TENAA.

However, specifications have been already disclosed by TENAA and AnTuTu benchmark, but we are not sure about it because firm is yet to make some official words regarding device. Codenamed as Xiaomi HM2014811, gadget has been claimed to confer more advanced feature than its predecessor. 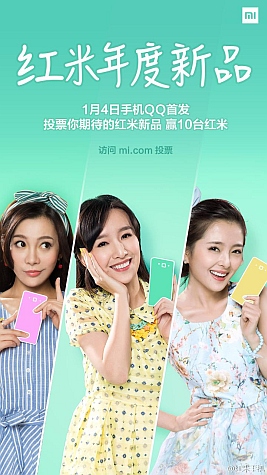 Apparently, most highlighted improvements are inclusion of 4G LTE connectivity along with Google's most plausible operating system, Android 4.4.4 KitKat. Moreover, forthcoming smartphone will be more svelte and light-weighted in compare to 1S with its 134x67.21x9.2mm dimension and a weighing of 132 grams.

Apart from Redmi series, corporation is also endeavoring on its next generation Mi smartphone, which has been speculated to be proclaimed at Consumer Electronic Show 2015. Notably, CES event is going to be held in Las Vegas from January 6 to January 9, where many leading companies like HTC, Samsung, Lenovo is already prepping to grab the heed of show by their upcoming devices.

Things You Should Know About Xiaomi Redmi Note 9
Views: 11229