The Opponent of ZTE Blade S6, Oppo 3000 Launched in China

After bringing some eye-popping smartphones: U3, Sapphire-enclosed: R1C and Mirror 3 in January, Oppo has made a comeback in the booming segment of mobile phones with its new creation, called 3000. In particular, device incorporates numerous alluring specs and it has been labeled with a competitive price tag of CNY 1,599 (roughly Rs. 16,000) in order to defeat currently present mid-range handsets, where ZTE Blade S6 is its biggest rival.

Paired with dual-SIM card slots, gadget is decked with NFC (Near Field Communication) and 4G-LTE functionality, which are the main USP of this phone. Additionally, device confers 3G, GPS, Bluetooth and Wi-Fi options on connectivity front.

Running on Android 4.4 KitKat operating system with ColourOS 2.0.1 UI, it features 4.7-inch HD Display with 720x1280 pixel resolution that do reminiscent of Oppo Mirror 3. The new heir of tech giant is powered by a 64-bit quad-core Qualcomm Snapdragon 410 processor that is clocked at 1.2GHz operating frequency and assimilates Adreno 306 GPU for graphics processing.

Oppo 3000 is integrated with a 2000mAh battery and Quick Charging 2.0 technology has been comprised into mobile phone to take the full advantage of its battery. Memory-wise, smartphone is arrayed with 1GB RAM alongside 8GB of internal storage, which can be expanded upto 128GB through a Micro SD card. 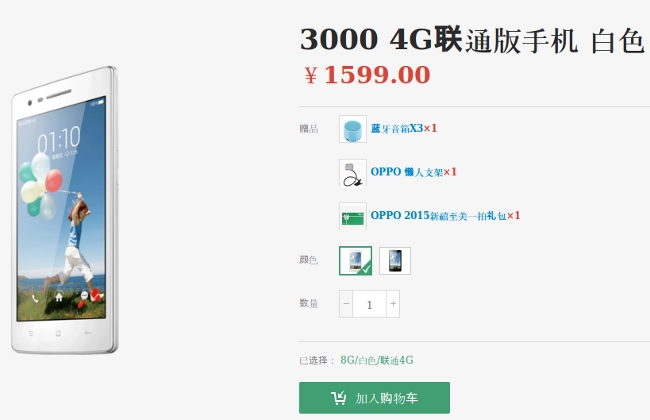 In terms of imaging, it's outfitted with an 8-megapixel Sony IMX179 sensor with f / 2.0 aperture and 5-element lens as well as front panel of gadget is clubbed with a 5-megapixel shooter to capture the best quality of images. As yet, device has been cataloged on company's official website and currently it's available to buy in China only at CNY 1,599, but there is no information about its arrival for other regions.

Oppo A9 Launched in India, Gets 4020mAh Battery and Dual Rear Camera
Views: 7413