Xolo Omega 5.0 and 5.5 with HIVE UI Announced on Twitter at Budget Prices

The domestic mobile maker Xolo has pulled the curtain off from its two Omega series smartphones, dubbed Omega 5.0 and Omega 5.5. Both handsets are priced at Rs. 8,999 and Rs. 9,999 respectively. Company went on Twitter and made the announcement for both devices’ launch for Indian market with HIVE UI. First time, the Company has come to a social network to announce its products instead of organizing an event.

Omega 5.0 will reach in stores on December 10 while the Omega 5.5 will begin to hit stores from December 20. Taking a glimpse of device, one can easily speculate that Company has given its prime focus on design. To make its aesthetic in looks, the tech giant has put their all efforts to create rounded edges and curved back panels. Metallic rims surrounding on the sides gives both smartphones impressive and captivating feel. 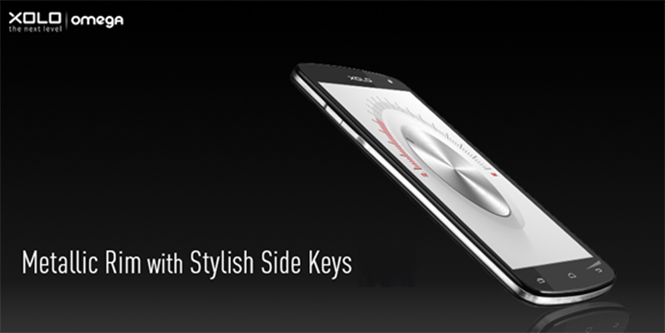 Omega 5.0 gets a 5-inch display while the Omega 5.5 has a 5.5-inch display that match with their names thoroughly. However, both displays offer the same 720x1280 pixels resolution. Running on Android 4.4 KitKat OS with Company’s own Hive UI, both devices will be proved perfect for meeting with the purpose. The Hive UI was first introduced with XOLO 8X-1000. This custom UI has several new custom features to make the Android experience more improved, customize and better. It is also claimed by Company that Android 5.0 Lollipop update will also be rolling out for both smartphones later.

Omega 5.0 and 5.5 are powered by the same 1.4GHz octa-core processor and MediaTek MT6592M chipset to boost the performance. It seems like both device share almost identical specs. The Mali 450 MP4 and 1GB RAM hide inside the phones for great graphics result and smooth multitasking reason. On the storage front, 8GB of built-in storage comes along with the option of expandable storage of upto 32GB.

On the imaging front, Xolo Omega 5.0 sports an 8-megapixel autofocus rear camera with LED flash and a 2-megapixel front-facing camera. On the other side, the bigger one has a 13-megapixel snapper with LED flash and a 2-megapixel front shooter. The 5 inch Omega uses Sony Exmor R sensor for its camera and the 5.5 inch phablet uses the Sony Exmor Rs Sensor. Both support dual SIM and come loaded with Wi-Fi, Bluetooth and GPS connectivity features. To energise the handsets, a 2,100mAh battery is packed inside the Omega 5.0 while a 2,600mAh battery is backed up the Omega 5.5 smartphone.