Nissan Introduces e-Power Drivetrain, How It is Different From EV and Hybrid System

Nissan has revealed a new electric-motor drivetrain system which is named ‘e-Power’. It is neither a pure Electric Vehicle (EV) nor a Hybrid technology which is being used in the current generation vehicles, though it's a brand new concept and for the first time it will be available for consumers. Surely, it is a significant achievement in the electrification technology by Nissan Intelligent Mobility. 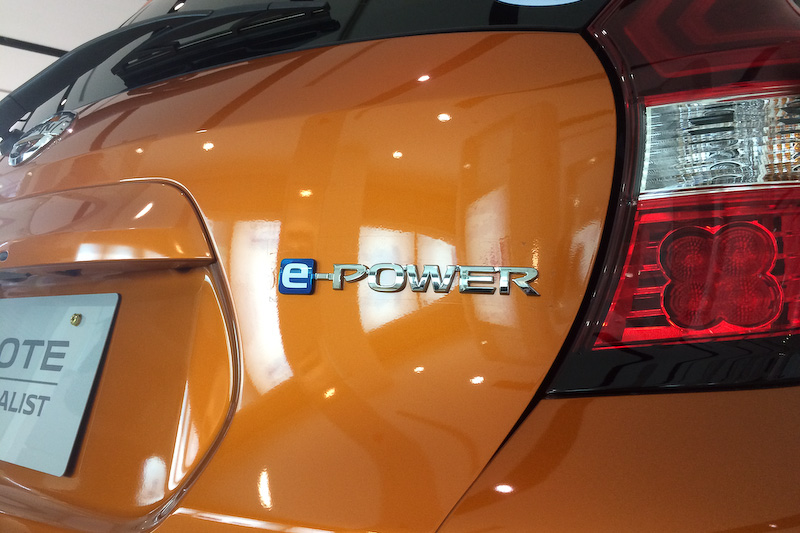 The new e-Power electric-motor drivetrain borrows EV technology from the brand’s Leaf electric car which has been sold over 2,50,000 units worldwide. But unlike the Leaf, e-Power adds a small petrol engine which is used to charge the high output battery when it requires. And thus avoid the need of external charger while offering the same high power output. The new e-Power system is classified as a Series Hybrid and the Note e-Power car will be the first in production which features series hybrid system.
Without making it too complicated, here is a quick review on the new e-Power electric-motor drivetrain: 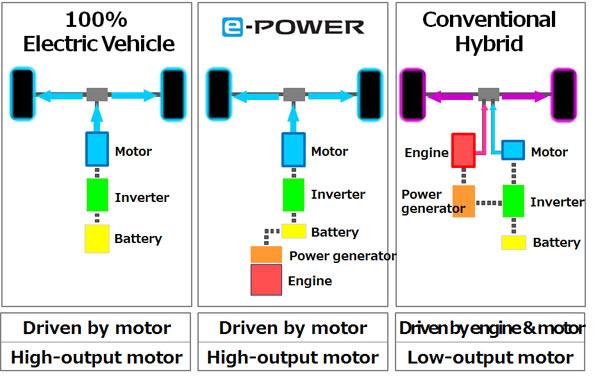 Before explaining e-Power technology, let us remind you how exactly pure electric and the conventional hybrid system works. A pure EV comprises a battery, inverter and a high-output motor. This is a simple configuration, the battery supplies current to the inverter which further employs the motor and then motor rotates the wheels. Whereas in a conventional hybrid system, there are both electric and mechanical setup connected to the wheels. A petrol or diesel powered engine and an electric powered low-output motor, both are used to move the wheels.
However, Nissan Motor Co developed e-Power system comprises a small petrol engine, power generator, inverter and a motor. Though, the petrol engine is not connected to the wheels at all, instead, it charges the battery. Since the motor is the only source to drive the wheels, it requires a bigger motor and battery, but thanks to the Nissan engineers who makes it possible to mount this lagers setup on the compact car.
Nissan stated that it have cracked the code and learned how to minimise and reduce weight, develop more responsive motor control methods and optimise energy management. And the results are now out, e-Power uses a smaller battery compared to the Leaf, but delivers the same driving outputs as a pure EV. 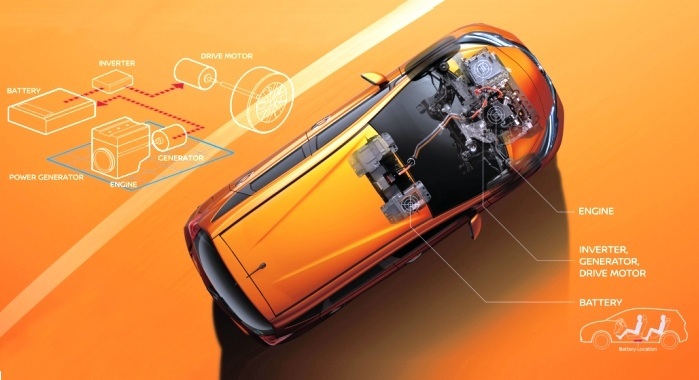 The Japanese carmaker is actively pushing the world on the zero-emission drivetrain and zero fatality through its EV program and autonomous drive technologies. And manifesting the efforts in the direction, Nissan has come up with ‘Nissan Intelligent Mobility’.
According to Nissan, it is committed to developing electric-motor powertrains that use various fuels for fulfilling the different requirements of the global markets. e-Power system is part of that initiative and company believes that it will strengthen the carmaker’s electric powertrains. The Japanese carmaker is also actively working on the research and development of the SOFC (Solid Oxide Fuel Cell) vehicle.
Get latest and updated information about automobiles on our Google Plus Community Speed Gears.

New Joint Board Will Be Created By Renault, Nissan and Mitsubishi: Declares MoU
Views: 760

Not To Be Missed Discounts On Nissan Sunny and Micra
Views: 807