2019 Bajaj Dominar Out for Delivery in Black and Green Combo

All new 2019 Bajaj Dominar - the long-anticipated bike of the year is officially out for deliveries and the first customers have already embraced the same and got photographed with the new Bajaj Dominar 400. First Bikes had been entrusted in Pune, Mumbai, Thane, and some other cities. The new Dominar is pricey than the older one by 12,000 with a starting price at Rs 1.74 lakhs (ex-Delhi).

The new Dominar looks more dynamic with the increased weight of 184.5kg kerb and heightened the power of 40 PS. There is 2kg addition in weight and 5 PS in Power. Other cosmetic and mechanical alterations which you will witness in the new Dominar will include new colour combo of Aurora green and Vine black, different graphics and black and chrome finished wheels that will replace the golden coloured ones noticed on the outgoing version, wider crash guards, bungee cord fasteners placed under the seat for baggage or panniers. The most obvious change is inverted front forks. A new radiator will be available to cool down the engine more effectively and easily and the handlebar will be heightened slightly. 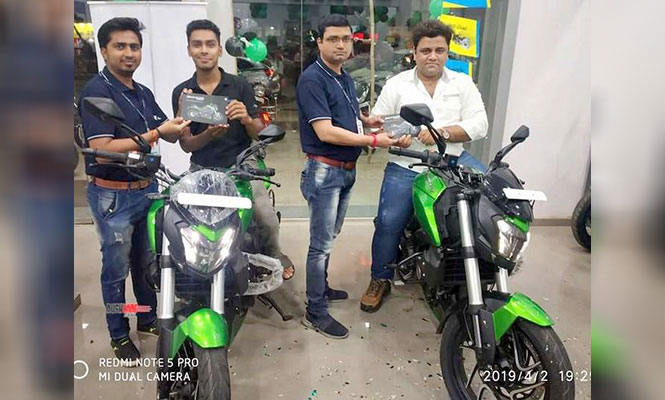 The 2019 Dominar 400 features the same body panels along with same headlamps seen on its earlier version with some changes in graphics to make it look appealing. The seat is heat stamped with the company logo, seat height is kept at the same level as the earlier Dominar. Adventure enthusiasts may not be super excited as the new model features the same ground clearance, wheelbase, length and height as seen in the earlier model.

The new Dominar 2019 has 373.2 cc single-cylinder liquid-cooled engine which produces 39 bhp at 8650 rpm and peak torque at 35 Nm but now comes at 7000 rpm, 500 rpm more than the current version. The 6-speed gearbox has been maintained. It is quite clear that Bajaj motorcycles have laid more emphasis on power while making the new motorcycle and this will let the motorcycle sustain higher speeds than its predecessor. The bore, stroke and triple spark plug configuration are carried forward from the earlier version. At 1.7 litres for drain and refill, the new bike consumes 200ml more oil than the older one. The bike’s width has been expanded from 813mm to 836mm. 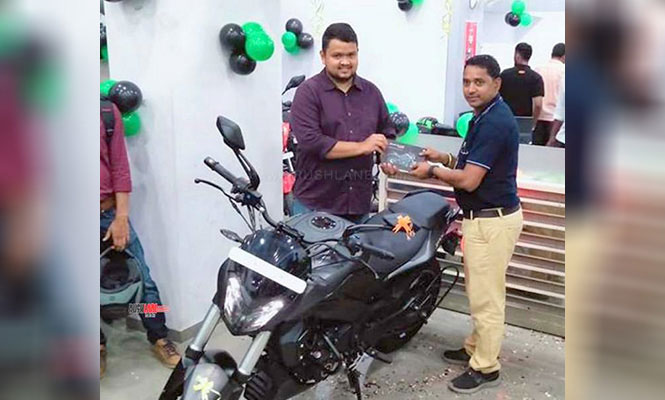 Bajaj has made efforts on suspension and braking. It comes with rear monoshock for efficient ride quality while braking is through the 320mm front and 230mm rear disc brakes. The front disc brakes accompany radially mounted calipers instead of axially mounted, the one featured in the outgoing model. Bajaj carries the instrument cluster along with many beneficial touring-oriented features. For freshers, it may now display a momentary fuel consumption, updated every 1.5 seconds. It also showcases the average fuel consumption with a one-minute refresh rate and the remaining range. There are two trip meters which display the average fuel consumption, average speed, fuel range, and trip time. These features will enable the rider to grasp an idea about his / her riding style and to manage fuel accordingly & efficiently.

At present, the Bajaj Dominar 400 is priced at Rs 1.74 lakh (ex-showroom, Delhi). The 2019 version is going to lock horns with the new Jawa, Royal Enfield Thunderbird and UM Renegade range in India.

Mr. Sarang Kanade, President – Motorcycles, Bajaj Auto Ltd said, “Dominar 400 has been able to create a strong following for itself and has become the preferred choice for city riders and long-distance tourers, alike. Customers have pushed the bike into extreme long distance and challenging geographies with aplomb, which inspired us to strengthen the sports tourer credentials in the new Dominar.”