2019 BMW X5 which is the fourth-generation of the outgoing SUV has been introduced in the brand’s Indian lineup. The company is asking for a price tag of INR 72.90 lakh for the base variant whilst the top two variants will cost you INR 82.40 lakh. The 2019 BMW X5 SUV hits the Indian shores via the CKD route hence it is being locally assembled at the BMW India's plant in Chennai. It comes with both engine options-diesel and petrol. However, the petrol option is only provided with the M Sport variant. While the other two variants like Sport and xLine is being offered with the diesel engine. The new X5 will be available to Indian dealerships in diesel variant from today while the petrol variant will mark their presence later this year.

At the exterior front, the new X5 gets a revised front bumper with a larger kidney shape design grille and a new headlamp setup with LED DRLs as well. These components go well with BMW’s new design language. While the rear is furnished with chunk LED tail-lights as well as with a restyled rear bumper. The M Sport package for the petrol model intensifies aggressiveness of the design themes.

Under the hood, the next-gen BMW X5 can be loaded with either a 265hp/620NM, 3.0-litre, six-cylinder turbocharged diesel engine in the BMW X5 xDrive30d or a 340hp/450Nm, 3.0-litre, six-cylinder turbo-petrol engine in the xDrive40i. While the power transmission will be managed via an 8-speed automatic gearbox which is capable of transmitting power to all four corners via an integrated BMW’s xDrive all-wheel-drive system and adaptive air suspension as standard fitment. It’s important to note that the petrol engine complies with the BS-6 emission norms. 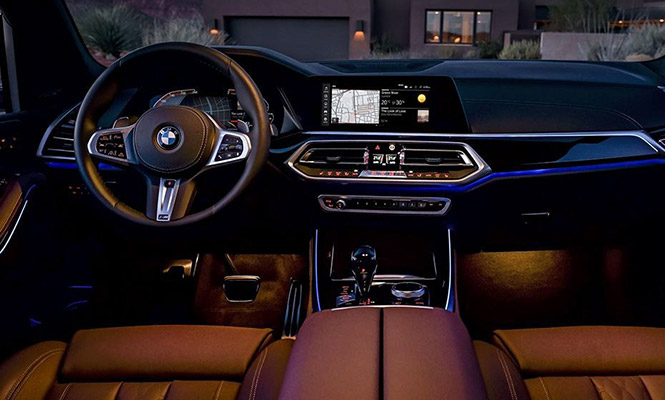 Dimensionally, the new X5 is bigger than its predecessor in all the three aspects which made it a more spacious offering than earlier. The availability of 40:20:40 split-folding rear seats helps increasing boot space from 650 litres to 1,870 litres. Moving inside the cabin, there are apparent changes in the form of an all-new dashboard layout with two 12.3 inch digital screens. One of them is a replacement of an analogue instrument cluster on the previous-gen model with a fully digital unit. While the other touch screen unit is an infotainment touch screen system.

Other than this, a new feature named BMW’s Parking Assistant Plus, is also included to this new X5. it supports in self-parking of the SUV and has been a common feature among the premium luxury SUV segment. Earlier than this, the X5 receives a major update back in 2014, which makes the SUV lagged in the segment against rivals like the Mercedes GLE, Audi Q7, Volvo XC90 and the Land Rover Discovery. Now with the updated version which comes with a two-year warranty package, BMW would stand firm with rivals in this segment.