After a year of its first electric production car, the e-Tron, Audi has exhibited it's new all-electric SUV - iQ4 E-Tron at the ongoing Geneva motor show. This is the 5th EV innovation of Audi, Fitted between the entry-level Q3 and the larger Q5, its production version will be hosted by international markets by 2020.

The brand with the four rings heading to have 12 EV hatchbacks on sale by 2025 and this fifth innovation by Audi is added to ante up in the distant dream of 2025.

Based on Volkswagen Group’s Modular Electrification Toolkit (MEB) platform Audi claims its new e Q4 E-Tron as one of the top-notch models in terms of size and market positioning with its 4.59-meter long and 1.9m wide size features. It is invented in a bit shorter and wider size than the current-gen Audi Q5. The smaller model - Q4 E-Tron displays some mechanical styling features of the larger SUV and exterior styling of E-Tron (and E-Tron GT concept)The Q4 e-Tron has a wheelbase of 2770mm, which evolves it as long as the Land Rover Discovery Sport. 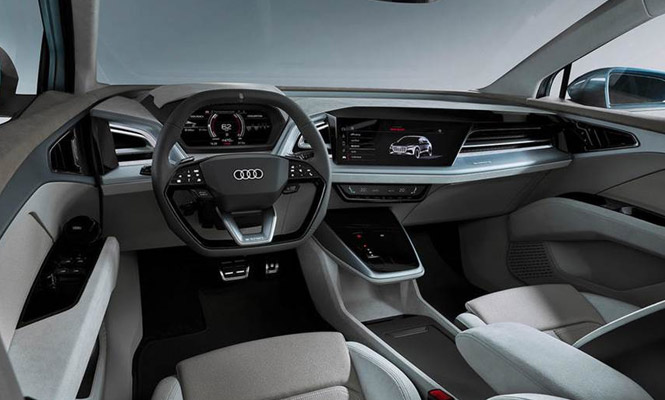 Audi debut Q4 e Tron in the special Solar Sky,shade of blue which is indeed a tenable innovation in two ways: The paint was selected produced under environmentally friendly conditions especially for the Audi Q4 e-Tron concept to enable it effectively reflects a short-wave fraction of sunlight, near the infrared spectrum. This defends the exterior and the interior cardinally from heat accumulation while abbreviating the energy input need for the air conditioning. This consequence the improvement in the range and the global carbon footprint of the Q4 e-Tron concept.

Audi claims to be Compact on the outside and spacious on the inside. The interior of the model comes with a dual-screen layout and minimalist, touch-operated switchgear; it displays as if these features could materialize into production effortlessly and rapidly.

The Q4 e-Tron is based on The modular electrification platform (MEB) which offers an expanded range of drive variants and power levels. The performance version of the electric drive can be witnessed in the Audi Q4 e-Tron concept. The front and rear axles, both are powered by an electric motor the Q4 is a Quattro. 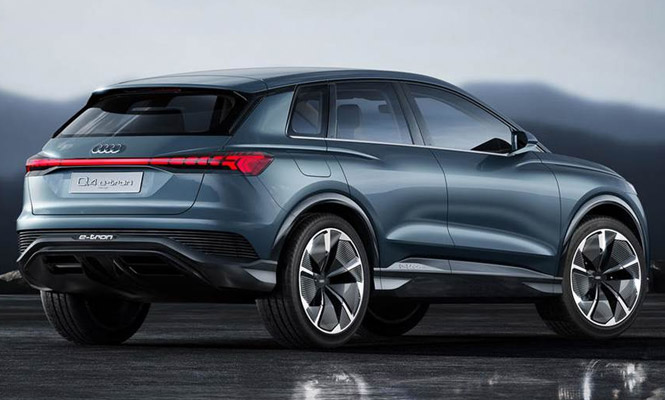 The electric motor in the rear end has an output of 150 kW and mobilizes a torque of 310-newton meters; the front engine supplies the front wheels with up to 75 kW and 150-newton meters. The system power is 225 kW.

The battery in the vehicle floor backlogs 82-kilowatt-hours empowers a range of more than 450 kilometres as per the standard bestowed by WLTP.