The updated Bajaj Pulsar 150 for Calendar Year 2019 has been seen at a dealership. The motorcycle was equipped with a going to be mandatory safety feature- the single channel ABS along with twin discs. This spied event confirms the arrival of soon by this month end. Other than this, we could also see the updated lineup of 125cc+ models with the government mandated safety feature.

As like the other Pulsar variants in Indian lineup, the Pulsar 150 twin ABS also receives a single channel ABS unit. Whereas the braking is handled by a pair of 260mm disc up front and 230mm rear disc. Other than the ABS system, the 2019 Pulsar 150 ABS twin disc also gets a rear lift-off protection (RLP) as standard fitment. Lately, a barebone version of the Pulsar 150 is also introduced by the company named as the Pulsar Classic 150. We expect this model to get updated with ABS and a rear wheel-speed encoder to support RLP in the coming future. 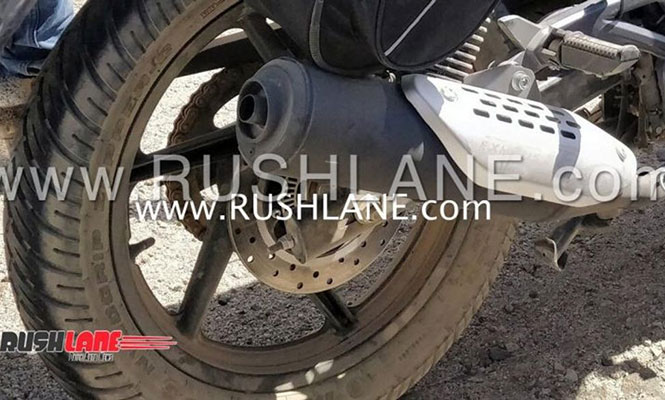 Apparently, the motorcycle carrying forward the similar styling with contrast body panels, blacked out engine and alloy wheels, split seats and LED taillights of the outgoing model. Mechanically, the similar 194.5cc air-cooled single-cylinder DTS-i engine that is being claimed a perfect amalgamation of performance and economy is bolted on the chassis to propel the bike. Mated to a 5-speeder transmission, the engine makes out 14PS and 13.4Nm of torque.

The suspension setup on this revived Pulsar 150 ABS twin disc is all similar traditional telescopic forks unit upfront and gas charged rear twin shock absorbers. While it stands on 17-inch alloy wheels shod up with tubeless tyres of measuring 90/90-17 front and the 120/80-17 rear unit as well.

Currently, the Bajaj Pulsar 150 Twin Disc variant with ABS is on sale at INR 80,749 (ex-showroom). The improved model with ABS is likely to carry the price tag dearer by INR 2,000 to 3,000 over the former variant.

Apart from equipping Bajaj Auto entire lineup above 125cc + displacement with ABS, the Pune based bike maker is also updating the product portfolio with more stringent BS-IV emission norms which will hit the country before April 1, 2020. And we could see the elimination of a few products owing to new replacements with different engines.