Ducati Panigale V4 R that is a race-spec version of the brand’s flagship, the Panigale V4, has launched in India. Well, it is a limited edition model of which only the five units will be provided in the country. The motorcycle that is priced at INR 48.94 lakhs (ex-Delhi), the bookings for the same has been commenced online albeit the deliveries are likely to start in the first half of 2019. Going by its exclusivity and price tag, the only bike which comes out as a competitor is the MV Agusta F4 RC that is also a special edition model from Italian marquee. Here in this post, we are comparing these bikes on write down aspects.

In terms of design and styling as the both bikes belongs to same nation Italy, are profoundly gorgeous. The Panigale V4 R continues with its conventional design for flagship superbike yet got a host of changes in the larger fairing with the inclusion of winglets and gill-like air intakes. On the other hand, the MV Agusta F4 RC that is the WSBK Reparto Corse inspired in terms of livery is more appealing than the standard model of the same. 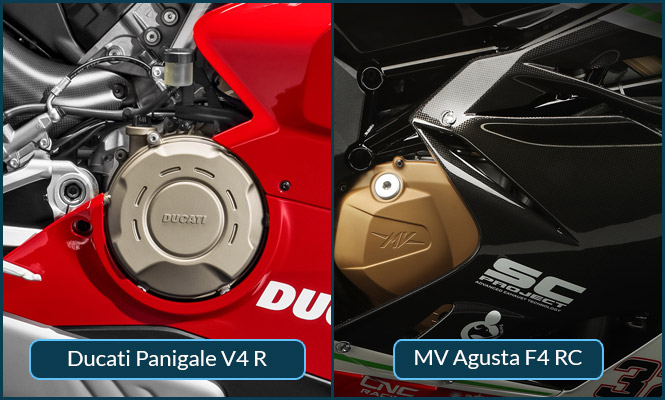 The MV Agusta F4 RC packs a 998cc, in-line four-cylinder, Corsa Corta mill inspired from the WSBK machine. It is capable of generating 205bhp and 115Nm of torque. However, there is a race kit on offer that enhances the power up to 212bhp. Meanwhile, the Ducati Panigale V4 R comes loaded with 998cc Desmosedici Stradale R engine which follows the WSBK regulations. The power output from the motor in question is 218bhp and 112Nm. While the addition of race exhaust and accessories increased power to a whooping 230.7bhp.

Based on a CrMo steel tubular trellis frame and suspend over Ohlins upside-down front forks and monoshock suspension at the rear, the MV Agusta F4 RC is controlled by the 320mm double floating disc on the front and 220mm single disc at the rear. The dual-channel ABS is being offered as standard fitment with disc brakes. Its kerb weight is 183kgs.

Holding on the redesigned chassis and frame for improved dynamics that the standard bike, the Ducati Panigale V4 R uses fully-adjustable Ohlins 43mm upside-down front forks and monoshock at the rear among suspension setup. While the composition of dual discs up front with four-piston caliper and a 245mm disc with dual-piston caliper at the rear handles braking duties. At 193 kg kerb weight, the Ducati Panigale V4 R is slightly heavier than the MV Agusta F4 RC.

In terms of pricing, both the motorcycles the Panigale V4 R and the Agusta F4 RC are premium in pricing. The MV Agusta F4 RC that is provided in a limited count of 250 units globally is priced at INR 48.94 lakhs in India. While, the Ducati asks for INR 51.87 lakhs for the Panigale V4 R. both the prices are applicable at ex-showroom, Mumbai.