The Chinese two wheeler maker, CFMoto has entered in Indian auto-mobile market with the partnership of Hyderabad-based group, Eider Motors. Sources believe that group has launched a new street fighter, CFMoto 650NK at a price of INR 3.37 lakhs (including taxes) in the nation. The new naked bike is cheaper compared to other 600-650cc street tracker bikes offerings from other giants as Kawasaki, Honda and Benelli.

The CFMoto 650NK is capturing the attention of the followers as it gets a unique appearance with excellent design. It looks like the Benelli 650i substantially. For an instance, the headlight faring borrows from the Benelli 600i. Other noteworthy features are exposed chassis, muscular fuel tank with quarter litre faring, split seats, high mounted handlebar and wider tyres.

Now comes to its powering, the 650NK gets the power from a liquid-cooled, parallel twin, DOHC, 649.5cc engine that produces a maximum power of 55.6 BHP and a peak torque of 62 NM. The powerplant is mated to a six speed gearbox that transfers total power to the rear wheel. The bike measures a ground clearance of 150mm, wheelbase of 1,415mm and seat height of 795mm. 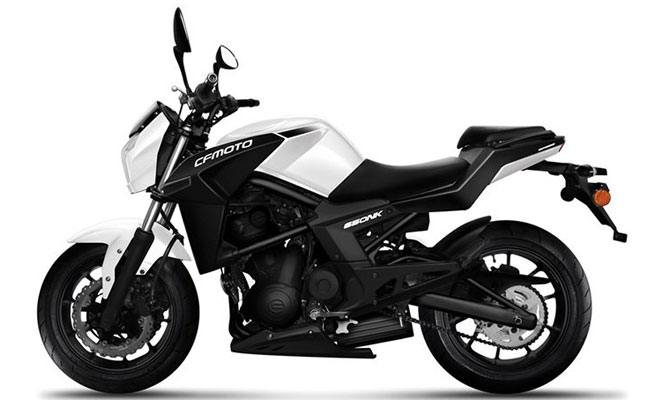