Ford Figo Facelift 2019 Launched, Here all you need to know

Ford India carries a strong brand value in the Indian car market for its hatchbacks with posh classy exteriors, premium-featured interior fit, and finish, and well-proven performance. After the EcoSport, the all-new Freestyle and a recent upgradation on the international platform with Ka, an American carmaker has brought a facelifted Figo to India also. The revivified hatchback has sprung out in seven variants with three engine-gearbox options. The hatchback is priced at Rs 5.15 lakh (ex-showroom, India).

Ford has launched the Figo facelift in India at Rs 5.15 lakh (ex-showroom, India) which is about Rs 70,000 cheaper than the model it replaces. Ford has lowered the price tag of the Figo, as it did with the Aspire and Endeavour facelifts, with an aim to endure the competition with rivals like the Maruti Suzuki Swift, Hyundai Grand i10 and Volkswagen Polo.

An improved performance, refined styling features, and upgraded & alluring interiors would give it an edge over its competitors, thereby making it a champion of the segment.

When we talk about styling features, the refinements introduced to the Figo is akin to the Ka and the new Freestyle. The design alterations include a new honeycomb mesh grille with refashioned front and rear bumpers. The design of fog-lamp is taken directly from the new Freestyle. The rear displayed a modified bumper with further black cladding to give a boost to its new rugged appeal. The Blu variant accompanies blacked-out mirrors, front grille, and roof to truly define a  sportier look. Additionally, the hatchback has come along with a fresh lighting signature and a set of newly tailored 15-inch alloy wheels. 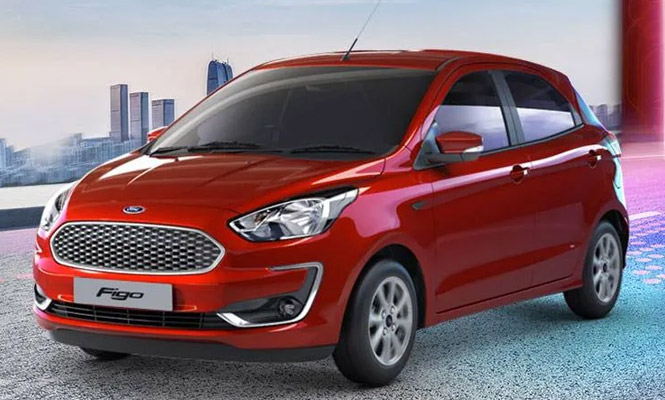 On the inside, Figo’s interior is depicting the cabin of the Ford Aspire facelift and Ford Freestyle with the most alluring update i.e. the 7.0-inch floating touch infotainment screen while aborting the new SYNC 3 system as witnessed on the new Freestyle and the EcoSport. The rest of the cabin represents elegance with single-tone and dual-tone finishing options and new pattern fabric upholstery. The new top-spec Blu variant is embellished with refined features like automatic climate control, push-button start/stop, automatic headlamps & wipers, keyless entry, and a parking camera. 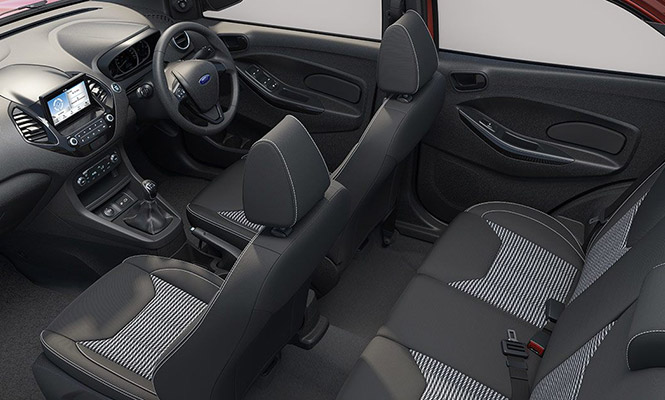 Safety is one of the top priority. The 2019 Ford Figo Facelift braking system is integrated with ventilated disc brakes at the front and drum brakes at the rear. The top variants will offer the ABS with EBD. The standard safety features will include dual airbags, one for the driver and one for co-passenger while the top-variant will offer flexible rear headrests, an excellent quality six airbags. Additionally, the petrol-automatic Figo gets more extra safety features in the form of ESP, hill-start assist and traction control along with the standard rear parking sensors, seat belt reminders, and a speed-alert system. 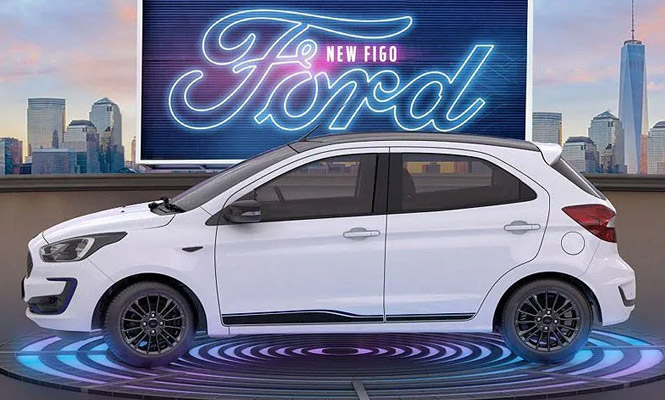 The Ford Figo Facelift delivers reliable performance with the refinement in engine and transmission system. It offers smoother transmission of power to the road wheels with the installation of two new petrol engines. 1.2-litre, three-cylinder unit mated to a 5-speed manual gearbox offers 96hp and 120 Nm of peak torque & the other 1.5-litre, three-cylinder unit integrated with 6-speed torque converter automatic gearbox, puts out 123 hp and 150 Nm of torque. The 100hp/215 Nm, the 1.5-litre diesel engine is cued from the earlier model, will empower the front wheels through a 5-speed manual gearbox.

The three trim levels – Ambiente, Titanium, and Blu are available on offer. The petrol-manual Figo (Ambiente) is priced at Rs 5.15 lakh, the Titanium is priced at Rs 6.39 lakh and the top range Blue variant is labelled at Rs 6.94 lakh. At present, the petrol-automatic is available only on the Titanium trim, priced at Rs 8.09 lakh. The diesel versions for the Ambiente, Titanium and Blu trims, are priced at Rs 5.95 lakh, Rs 7.19 lakh, and Rs 7.74 lakh respectively. The below-given table will facilitate the comparison of the prices between the Figo facelift and its predecessor.