Holographic Hammer Shaped up the KTM Duke 390 into a SCRAMBLER

After United States, United Kingdom, Italy and Germany, the Paris has also roped up itself in the market of motorcycle customization. The Holographic Hammer is the one who is currently in the top news section, as they have come up with an all new concept of turning the motorsports motorcycle into a Scrambler. The KTM Duke 390 is the one who was being Scramblerized by the custom-maker. We can also say that the custom people have given a retro-touch to the highly-proficient motorsports motorcycle. Let me get you through the details of the naked personality now carrying a Scrambler look. 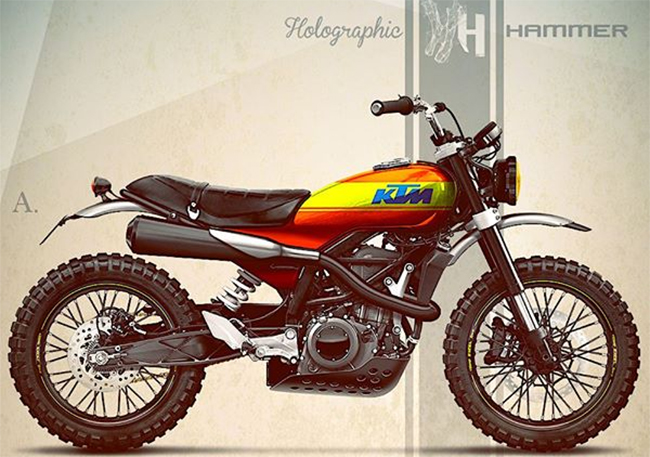 The Holographic Hammer has showcased two variants of the customized KTM Duke 390. The first variant showed up an off-road concept. It is a dirt bike, which is loaded with knobby tyres, heightened handlebars and horizontally shaped chassis. The firm has given an attractive paint scheme to the motorcycle, i.e. Bright Orange combined with Yellow along with a highlighted Blue colored KTM logo on both sides of the fuel tank. The heightened seat position incorporated with trellis frame gives you the feel of riding a Scrambler. The exhaust tail stands in the upright position, going in a parallel manner with the seat.

The retro-style of the dirt bike can be concluded by the minimal design and the theme carried by the motorcycle. The upward front fender has been installed to give this bike a real off-road attitude along with the round-shaped headlamp in a Yellow colored frame. The designer spoke wheels and the knobby tyres will always be there to make your ride adventurous. 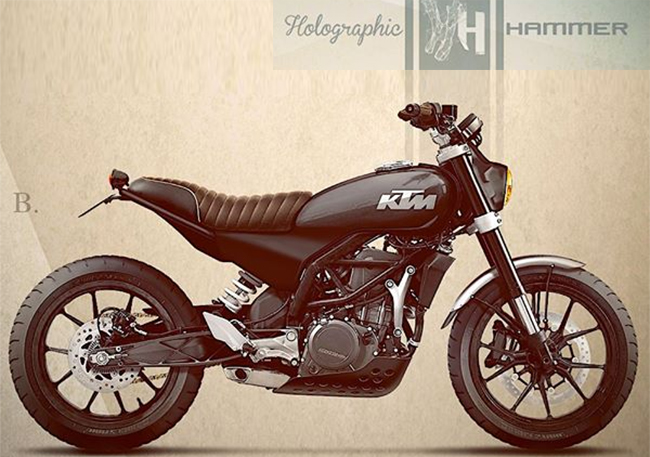 Talking about the next variant, it is a purely retro-styled scrambler. The minimalistic design at the rear section looks outstanding along with its layman style. The under-belly exhaust tail, ribbed seat and the triple-tree integrated headlamp just looks perfect for this scrambler. The manufacturer is offering single color for this variant, i.e. Black with sprinkled silver at some places. However, both the variants showcased by the Holographic Hammer simply remind me the newly launched four variants of the Ducati Scrambler.