Happy days ahead for the Honda sports bike fans!!!! 2019 Honda CBR500R might be the next big thing from the Japanese brand for the Indian sports bike lovers. This new bike is also expected to come up with some cosmetic upgrades. Firstly, the cosmetic changes were seen on the CBR650R whereas later all the remaining sports bike models from the Honda lineup have been upgraded in terms of design. All the new models wear the same front facial expressions with a slight change in the fairing size and a different set of equipment. A refined front cowl is also expected in new Honda CBR500R, which will also make space for two brilliant LED headlights.

Talking more about design, the indicators are sharp and are also mounted on the inner layer of the fairing. Single exhaust and twin exits can also be seen on the side profile of the bike which gives a big bike feel to Honda CBR500R. A sharp tail and massive fuel tank with visibly connecting, dual tone under seat panel can also be observed while eyeing the side profile of the bike. At the front, a huge petal disc brake and ABS can be seen whereas the rear disc is compact and smaller in comparison to the rivals bikes in this segment. 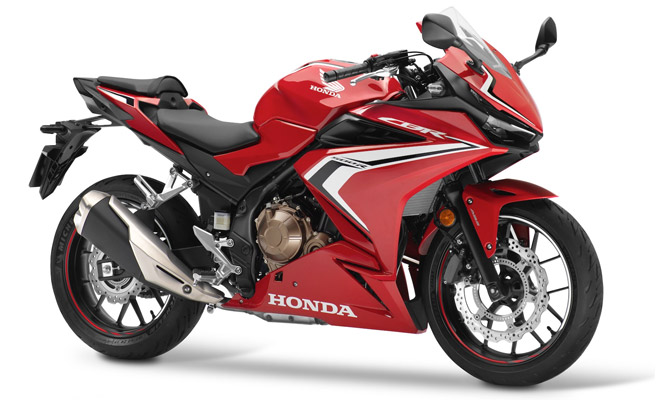 As far as the competition is concerned, the new Honda CBR500R directly compete against the like of Kawasaki Ninja 499 and other middleweight performers thanks to its powerful 471cc parallel twin engine placed under the fairing. The benefit of extra displacement to the bike is the 43 Nm of impressive torque at just 47 hp power.

In India, the new Honda CBR500R might launch soon as the Japanese bike manufacturer is planning to lock horns against Kawasaki Ninja 400 sports bike in upcoming months. The company sources have also launched CB300R bike, and with this, it seems clear that Honda is planning to expand its premium motorcycle range. On the dimension front, the new Honda CBR500R comes with a 120-section front tyre whereas the rear tyre size measures 160. This new bike also comes with dual channel ABS feature for safer riding.

As far as the speed is concerned, the new Honda CBR500R can easily touch the 200 kph mark with the help of ZR-sped tyres while staying stable. The fuel tank capacity is 17.1 litres with Honda Motorcycles claiming a highway mileage of 28.6 kmpl for this sports bike. Well, if Honda CBR500R comes to the Indian shores, then it is expected to be priced somewhere around INR 5 lakh (ex-showroom price).