Husqvarna Vitpilen 401 which is an upcoming motorcycle into Indian two-wheeler industry, has recently been spied in a near production ready guise. The spotted test mule was heavily camouflaged still a host changes which Indian-spec model will get as opposed to global spec model has been noticed. The global spec model comes equipped with spoked wheels while the model which will launch in India is expected to carry orange colour alloys as of the KTM 390 Duke. Additionally, the Husqvarna-branded engine casing is confirming that the captured model is a near-production stage model, unlike the Svartpilen 401 test mule, was seen with the KTM engine. Other attributes which were visible through the camouflage too includes LED headlamp mirrors, grab rails and other design units.

From the surfaced images, the Husqvarna Vitpilen 401 test mule appears to be packed with a pair of MRF Tyres. The global specs model and the KTM 390 Duke, on the other hand, rides on Metzelers rubber, which is expected to be provided as an optional extra at its launch. Moreover, there will be a saree guard in order to comply with norms in India.

If the underpinned cycle parts are considered, the India-spec model is more likely to share the majority of its components from the KTM 390 Duke. Out of which, a number of components are visible in the leaked images comprising USD front forks and monoshock sourced from WP, a 320mm disc up front and a 230mm disc at the rear. In addition to this, there will be a dual-channel ABS unit as standard. 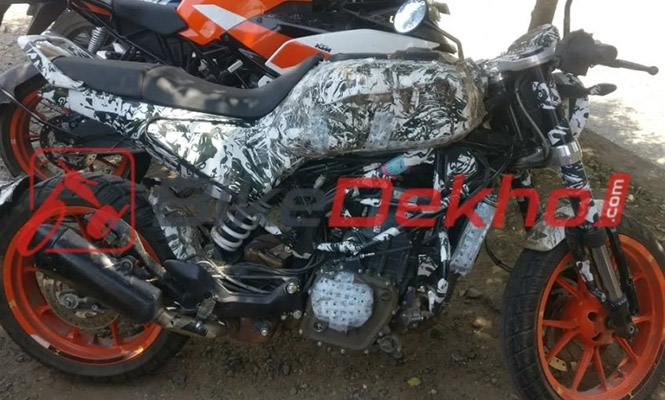 The upcoming Husqvarna Vitpilen 401 will be powered by the 373.2 cc single-cylinder engine. The mill which performs propelling duties on the ongoing Duke 390. The Duke 390 uses the churned power of 43.5bhp along with 37Nm of peak torque via a mated 6-speed gearbox.

With a similar powertrain, the European-spec Husqvarna Svartpilen 401 model uses a similar churn power output, which makes us believe that the India-spec model will be continued with the same power figures as well. According to the Rajiv Bajaj, MD, Bajaj Auto, the Husqvarna range of motorcycles will hit the Indian two-wheeler industry this year. Also, in its initial phase, the brand will commence its operations with up to six of its models.

Out of which, the Husqvarna Vitpilen 401 and Svartpilen 401 will be the model to go on sale initially. While the other models will follow in the near future. In terms of pricing, the Husqvarna bikes will be priced above the KTM 390 model, which suggests a price sticker of around INR 3 lakh (ex-showroom). In its segment, the forthcoming Husqvarnas will go in competition with the likes of Honda CBR300R, BMW G 310 R, and the Royal Enfield Continental GT 650 and the Royal Enfield Interceptor 650 models as well.