KTM Duke 390: Old V/s New- Changes You Should Know About

Ever since its debut in the Indian biking industry along with its first premium street bike Duke 200, KTM has become one of the most prominent motorcycle brands in the country, mostly among the young generation.

Devoted to entry level performance bikes in both naked street and sports segments, KTM is now offering countable yet impactful bikes in Duke and RC range of motorcycles. In India, KTM is popularly known for manufacturing stylish, agile, and performance-focused bikes in the comparatively affordable price range.

Continuing the same journey, the manufacturer has introduced an updated model year range of its existing Duke lineup. Here, we are going to discuss the 2017 KTM Duke 390 by comparing its old and new versions on some basic points which are write-downs.

Well! Let's start with the thing which is noticed through a single glimpse of any object, the design and body work. The 2017 KTM Duke 390 is much more different from the old one in terms of looks. The new Duke follows aerodynamic feature in its "Z" sharp body language, running from its new bifurcated all-LED headlamp to the much-promised tail section. The new design helps in improving the dynamic ride quality of the bike.

Aesthetically, the noteworthy components on the new Duke are the pumped fuel tank with large extension, more exposed trellis frame, and a new exhaust system. The fuel tank now has the capacity of 13.4 liter which was just 11 liter in the last model. Underbelly exhaust has been replaced with a new exhaust system which complies the BS-IV emission regulations. The new model has also found alterations in dimensions as it gets higher ground clearance of 185mm, and the bike has become 10kg much heavier and stands on 149 kg. 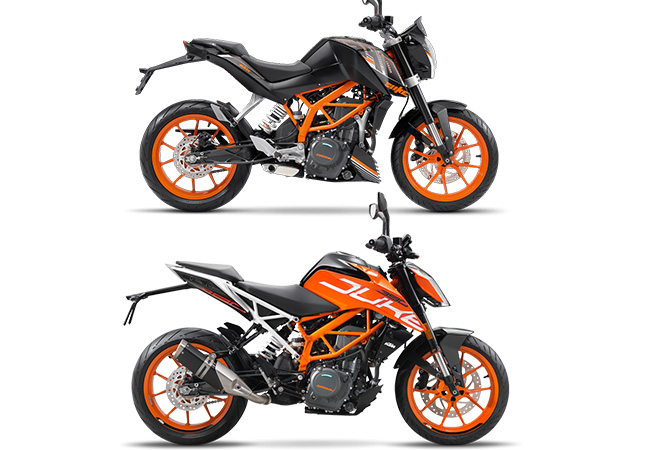 2017 Duke is powered by the same 373.2 cc liquid-cooled, single cylinder engine. But the engine has been tuned not only to comply the stringent BS-IV emission norms but also to modify power and torque figures. Now 2017 Duke 390 will use the same 44 PS of power along with enhanced 37Nm peak torque via 2Nm. Mated gearbox transmission is similar to the ongoing version, a six-speed gearbox transmission with a slipper clutch.

The new Duke 390 sports a new multi-functional TFT display which is more informative than the LCD unit on the regular Duke. It further allows you to use the screen as a navigation display through an optional MYRide multimedia interface and compatible with the smartphone. The switches are mounted on the left handlebar for various actions as ABS ON/OFF and riding modes switch. 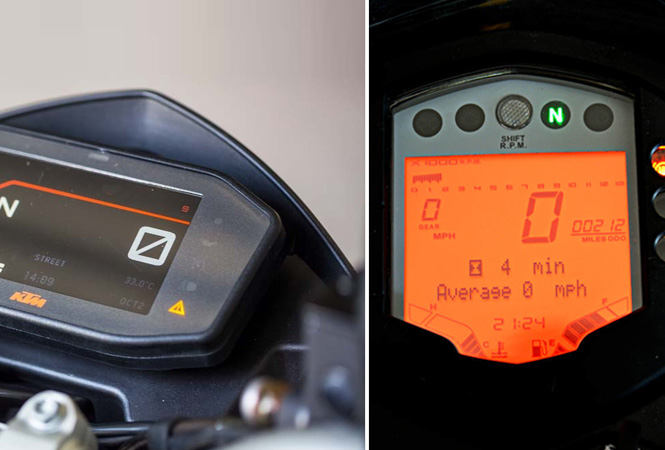 There are a lot more updated equipments making the bike more worthy of the price. The list includes various hardware components such as 43mm WP open cartridge upside down forks instead of conventional USD fork and rear mono shock suspension.

Braking department adheres a larger disc rotor measuring 320mm against to 300mm on the outgoing trim. Adjustable brake and clutch levers are also marked in the features list of this new Duke. The electronic package comprises some new attributes like ride-by-wire, riding modes and the top self safety dual channel ABS mechanism.

In lieu of all these updates and additional features, bump in the price of the Duke 390 is obvious.The aggressive and performance focused naked runner, the 2017 KTM Duke 390 is now priced at INR 2.25 lakhs (ex-showroom, Delhi) which is INR 30,000 higher than that of the previous model.