Based on the new platform, Mahindra & Mahindra is going to launch a new compact SUV in the Indian car market. Christened as Nuvosport, this model comes as a heavily updated version of Quanto. With information available, it will be available in six variants namely N4, N4+, N6, N6 AMT, N8 and N8 AMT. Just like we had reported earlier, the facelift Quanto unit will launch on April 4, 2016.

Mechanically, the Mahindra Nuvosport will get propelled by a 1.5-litre three-cylinder engine that is based on the mHawk platform. In addition, the company has offered two drive mode option such as Power and Economy with different outputs. At the time of Power mode option, it will generate 100 Bhp of power and 240 Nm of torque. On the other hand, the engine is tuned to belt out 72 Bhp of power and 180 Nm of torque at the time of Economy mode. To perform transmission duty, the engine comes mated with a five-speed manual gearbox as well as an AMT option is also present. 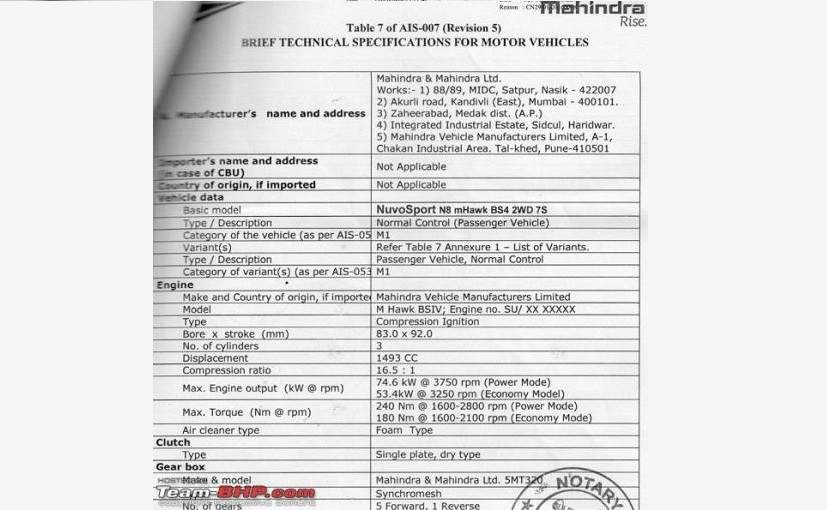 You may also read: Mahindra to Launch Next Generation Thar in 2018 with 1.5L Engine

Some interior details have also come out that includes revised dashboard, steering and leather upholstery. Moreover, the car will uphold the same seven-seater layout as the Quanto. Besides, Mahindra may attach some additional features to the top end variants like reverse parking camera, centre console, Bluetooth connectivity with a dual DIN touchscreen infotainment system, lumbar support, and cruise control.

The exterior has already been revealed with its first official images that are listed as alloy wheels, restyled headlamps, front grille and bumper. The price details are not confirmed yet, it could lie between INR 6.5 Lakhs to INR 8 Lakhs, ex-showroom.

Mahindra Nuvosport C-SUV To Be Launched By Next Month
Views: 2274

Mahindra and Mahindra Bought the Stake of Navistar
Views: 1366