As expected, the Mahindra XUV300 has been launched in India on 14 February 2019 at a starting price of Rs 7.9 lakh for the petrol engine while the diesel engine has been priced at Rs 8.49 lakh. Mahindra’s widest SUV has arrived in the Indian market and now it is ready to compete with rivals such as the Maruti Suzuki Brezza, Tata Nexon and Ford Ecosport.

The Mahindra XUV300 is developed on the Ssangyong Tivoli platform. The XUV300 is the sixth attempt from the Mumbai-based auto manufacturer to make its place in the mini SUV market which is presently being dominated by the likes of Brezza and alone generates a monthly sale volume of around 23,000-28,000 units in the Indian market.

Mahindra & Mahindra has offered the XUV300 in both petrol and diesel engine options. The diesel engine variant comes with a starting price of Rs 8.49 lakh and goes up to Rs 10.8 lakh for the top-end version. However, the top version of the petrol engine is available for purchase at Rs 10.25 lakh. In a similar price tag, the Brezza diesel- engine option is available for purchase at a starting price of Rs 7.77 lakh. The Nexon diesel and petrol engine versions are priced at Rs 6.4 lakh and Rs 7.44 lakh respectively. Ford Ecosport’s petrol version is retailing at Rs 7.82 lakh while the diesel version is available for purchase at Rs 8.41 lakh. All of the aforementioned prices of different cars are ex-showroom prices of Mumbai. It must be noted that price may vary from market to market.

The Mahindra XUV300 petrol engine version has been equipped with a 1.2 litre (three-cylinder) that delivers a 110bhp of power. This is the same engine which can be found in the smaller KUV100 but it has been tuned up with a turbocharger for better power offering. The Mahindra XUV300 diesel variant has a 1.5 litre (four-cylinder) engine which we have previously seen on the bigger and heavier Marazzo. The 1.5 litre (four-cylinder) diesel engine churns out a 115bhp of power which is slightly lower than the Mahindra Marazzo. The transmission duties of diesel and engine versions of XUV300 are being carried out by six-speed gearbox. 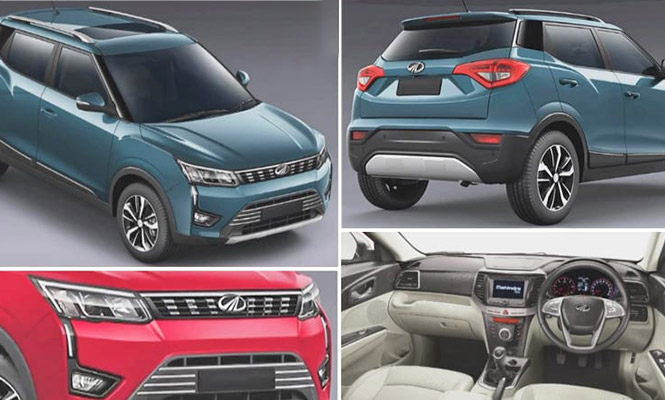 According to media reports, Mahindra would soon launch the AMT variant of diesel XUV300 in the near future, though the exact timeline is not available at the moment. Mahindra & Mahindra (M&M) Indian car manufacturer is also reportedly working upon to launch a fully electric variant of the XUV300 most probably in the second half of 2020.

The compact SUV comes with many of the great features such as seven airbags, three driving options, front parking sensors as well as disc brakes on all wheels. The XUV300 from Mahindra has been equipped with standard safety features which include dual-zone air-conditioning, heated ORVM and seat belt reminder for all passengers.

Inside the cabin, the Mahindra XUV300 gets a 7-inch touchscreen infotainment system, rear parking sensors along with the camera, leather upholstery, push-button start, dual-zone interiors, hill hold and six-way adjustable driver seat, smartphone pairing and more.The Mahindra XUV300 will be available in six color options and three variants on each petrol and diesel engine options. Mahindra has also launched another variant which can be purchased by paying an additional amount of Rs 1,19,000.

Mahindra & Mahindra (M&M) has a below 30 percent market share in the utility vehicle segment even after having the biggest product portfolio in the automobile sector. After the launch of XUV300, now Mahindra has five cars in the below 4 meters product category namely XUV300, KUV100, TUV300, Bolero Power+ and Thar. In the recent years, the demand for Mahindra vehicles has decreased significantly, owing to which the company has recently stopped the production of the Mahindra Nuvosport (rebadged Quanto).

Mahindra Confirms Next-gen, Will Not Participate in Auto Expo 2020
Views: 4996