Mercedes Benz, German automobile manufacturer is hosting an event on 4th September 2018 where the company would unveil its new EQ sub-brand in Stockholm. Mercedes Benz Electric Crossover will be the first product under the EQ brand which will be based on electric SUV, dubbed as EQC Electric SUV.

Mercedes Benz has started teasing the EQC Electric SUV before the official announcement as the video of upcoming Electric Crossover has appeared on the internet which reveals the front bumper side of the car. In a teaser video, the upcoming EQC Electric SUV has sleek and stylish LED DRL strips which said to provide good lighting during the low-light conditions. 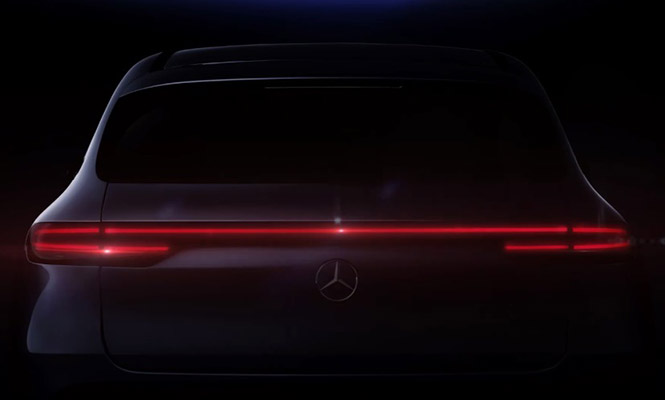 Currently, we don’t know the technical details of EQ Electric Crossover but we know that it will be based on carmaker’s Modular Electric Architecture (MEA) concept which was particularly designed for the electric vehicles. As per the previous Mercedes Benz reports, it is anticipated that EQC is equipped with a 70 kWh battery backup which provides an electric range of 'up to 500 kilometers' (310 miles).

Once the Mercedes Benz launches the EQC model it would compete against other electric SUV including Tesla Model X and the Jaguar I-Pace. It looks like that the other car manufacturers are also working on electric vehicles such as the Audi E-Tron Quattro, BMW iNext, Mini electric, Skoda Vision E, Hyundai Nexo and more. These electric vehicles are expected to come in the near future.

It is anticipated that the company would unveil more teaser hints in the upcoming days regarding Electric Crossover before the formal launch.