Suzuki Jimny May Delay in Launch by 2020 in India

Recently, Suzuki Jimny is unveiled officially for the Japanese market and across the world. Starting from today, it is available in Japan for sale and expected to launch in Europe and other markets by 2018 end.

The second showcase has happened at the Gaikindo Indonesia International Auto Show. The company is working with Jimny assembling to launch in Japan as well as Indonesia markets and export them as well. As sources informed the Suzuki is not interested to bring the Jimny three-door version as it will not generate a good business in India. The company is thinking to bring the bigger 5-door version of the model in India. The project is under discussion and when it sees go, the Jimny would take time to reach the Indian market and expected to come by the FY 2020-21.

Few days back, Suzuki has revealed the official brochure of the Jimny mentioning a lot more information which was unknown till yet. The brochure reaffirms that the new-gen SUV will be available in two versions namely a bigger and more furnished Jimny Sierra and the Standard base model. Both the SUVs will be available in XG, XL, and XC versions. Further, the company also revealed the Jimny on the official website of the company along with certain images. The new-gen Jimny will make the official debut on July 5.

This time, It is also revealed that the Jimny will use a ladder-frame chassis in order to maintain the rugged identity whereas the four-wheel drive vehicle is part-time and reveals a low-range transfer gear. 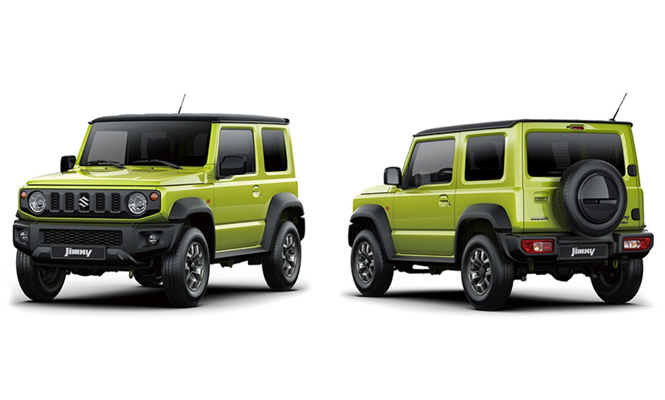 The new-gen, small 4x4 SUV will get heavy design along with styling improvements, rendering an overly new appearance. With the boxy formation and square window, the new Jimny looks like a small variant of the Mercedes-Benz G-Class. Other revisions in appearance include round multi-reflector halogen foglamps on both ends, a black heavy duty front bumper, individual turn indicators, iconic five-slot grille designed in matte black color finish, a set of stylish black five-spoke alloy wheels, black five-spoke 15-inch alloy wheels, a pair of classic round headlamps, boxy wheel arches, and a wide central air dam. In contrast with the roof, it takes a black treatment with ORVMs. 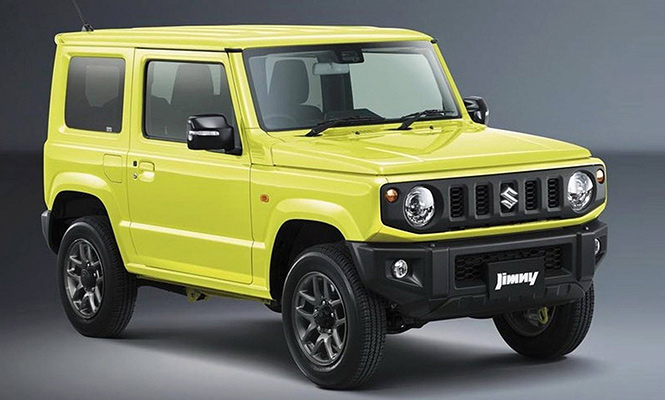 For the Japan market, the Jimny will obtain a 660-cc engine. For India, one expected to get a 1.0-litre Boosterjet or the new 1.2-litre petrol engines. But, the recently revealed brochure suggests that it will get new 1.5-litre, four-cylinder, petrol (K15B) engine of the new Ciaz. Along with the Ciaz facelift, the engine will reach India soon. The K15B is able to churn out a peak power of 104hp and a peak torque of 138Nm. In the global variant. It doesn’t get diesel option but we can expect 1.3 DDiS diesel for India. Both the engines come equipped with a 4-speed automatic transmission and 5-speed manual. The smaller SUV will be available with Pro 4x4 system with enhanced capabilities.

Suzuki launched all-new Suzuki Jimny officially in Japan. The SUV is expected to launch in India as well in future. With the launch in India, it will replace the Maruti Suzuki Gypsy in the market. The lightweight SUV has the amazing off-roading skills which were shown in a Video from Japan. During the video, it goes all the way to off-road track, faces challenges such as chicken humps at high speed and climbs steep inclines as it completes the whole lap in a minute.