The Model structure and some specifications of the upcoming Renault Kwid EV got revealed through the leaked drawings. The leaked drawings hint that he Kwid EV is going to look moreover like the regular petrol-powered model in place of K-ZE concept, which has been hinted prior to last year’s Paris Motor Show.

The Kwid EV is expected to be launched in certain Global markets like China in the summers in 2019. At this point of time, the first official drawings of the model have been leaked which reveals the looks and some of the specifications of the said upcoming Models.

Strategically, Kwid EV has been sent on the roads for a camouflaged test mule and had been captured. The model has been spied during the tests which have been conducted on the roads of China. The leaked drawings would reveal that how would the would be launched model be different than its petrol-powered counterpart.

Considering the drawings, the look of the production-spec Kwid EV would resemble the regular petrol-powered Kwid and not like the K-ZE Concept which was hinted and revealed prior to the 2018 Paris Motor Show.

The basic changes would come in the terms of headlights, front fascia, bumpers and rims which would be different from the regular model. The spy shots reveal the interior and it shows a blue accent on the centre console that is aided for electric drivetrain controls. The Model is expected to be reaching the Indian market after 2020. 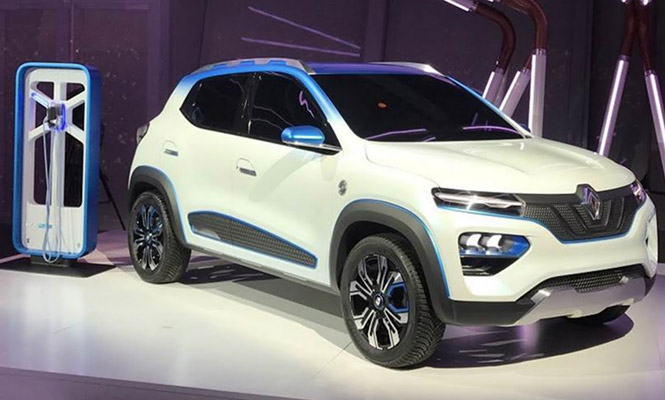 Talking in detail, this China-spec Kwid EV would be having different rims, new headlights and tail lamps. The car would be equipped with new front grille and revised bumpers at both the ends. Earlier when the Kwid EV went for tests on the road, the shot taken at that time revealed the glimpse of the cabin of the model. Looking broadly, both the electric and the petrol-powered Kwid have got the same body styling and stance but could be easily differentiated bases their bumpers, headlights and wheels.

The Electric vehicle of this model has headlamps featuring a sharper design and would be likely to pack LED projector lamps and not the halogen units as evident on the regular model. This car has fog-lamp housings which are this time kept as air vents expectedly for facilitating the batteries for cool. The design of the front grille and the skid plate are different this time.

The New bumper has a reasonable and noticeable different cladding bounded by two vents at the rear end. But the exhaust is missing there. It is expected that the Kwid’s Regular model would also undergo such cosmetic changes soon as under a mid-life refresh technique.

The Brand Renault Claims a range of around 250 km for its Kwid EV. Above all, the production-spec model is yet to be tested as per the new WLTP (Worldwide Harmonised Light Vehicle Test) cycle which has been defined and directed by the European Union.

The Production for the global-spec Kwid EV expected to be starting in mid-2019. However, in India, the Model would only be launched by early 2020s or until the affordable electric car market in India becomes practicable.

However, Maruti Suzuki is expected to be launching its EV based new WagonR around 2020.