Royal Enfield Continental GT 650 is the newest motorcycle in the company’s Indian lineup with the most powerful engine ever in production. It is the replacement of older Continental GT in the current lineup. In its segment, the Continental GT 650 seeks competition with Kawasaki Z650 and Harley-Davidson Street 750. However, the factors such as its pricing and power output make the GT 650 stand against the KTM Duke 390 besides belonging to completely different bike category. Have a look at how these rivals compete for each other on paper specs comparison.

Design wise, the Royal Enfield Continental GT 650 follows retro styling though with a flair of sportiness. It features a round headlamp, twin-pod instrument cluster and heavy use of chrome across the body give the bike an old-school charm. While the fitments such as the clip-on handlebar and angular tank offer a sporty riding stance and dynamics. On the other hand, the KTM 390 Duke is a completely different motorcycle, an aggressive streetfighter with sharp and sleek styling across the bodywork. 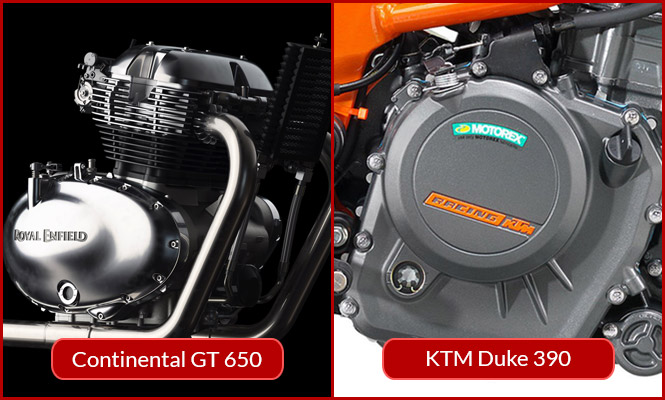 Beneath the fuel tank, an all-new 650cc, twin-cylinder, air/oil cooled motor is responsible for powering the Continental GT 650. In association with a six-speed gearbox, the motor is rated to generate the peak power of 47bhp along with 52Nm of torque. While the powertrain setup is vibration free owing to its 270-degree crank angle setup.

On the other hand, the KTM 390 Duke gets a 373.2cc, liquid-cooled, single cylinder motor that is comparatively smaller than the one being used in the GT 650. Despite that, the generated power output stands at 42.9bhp and 37Nm that is competitive with the Continental GT 650. The power transmission here is handled by a six-speed gearbox, while the presence of a slipper clutch and ride-by-wire throttle makes the motorcycle more racing friendly.

Among the underpinnings, the Continental GT 650 is based on a steel tubular, double cradle frame and mounts over 41mm telescopic forks up front and rear placed twin-gas charged shock absorbers. The controlling or handling of the GT650 is under the supervision of front wheel armed with a 320mm disc with twin-piston Brembo callipers and 240mm rear disc in connection with a dual-channel ABS that improvises braking. The motorcycle rides on 18-inch wheels shod up with Pirelli tyres.

Meanwhile, the KTM 390 Duke underpinned a steel trellis frame that mounts over suspension setup comprising 43mm upside down forks upfront and WP monoshock at the rear. For braking, the Duke 390 is equipped with 320mm single disc up front with four-piston caliper and a 230mm rear disc with single-piston caliper. While the association of dual channel ABS offers precise braking without skidding and wheel locking hassle. It rides on one inch smaller wheels at 17 Inches which comes wrapped up with Metzelers. 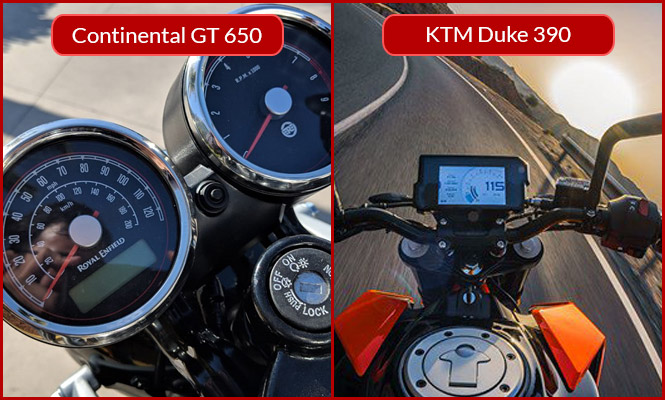 The Continental GT 650 that is a retro classic with modern touches features conventional bulbs for illumination, an analogue instrument cluster with digital fuel gauge, odometer and two trip meters.

On the other hand, the KTM Duke 390 won the battle in this aspect with a bucket full of modern features. Including LED headlamps with DRLs, full-digital TFT LCD instrument cluster with Bluetooth connectivity, slipper clutch and ride-by-wire throttle. In addition to this, the ABS is also being provided with three modes- Road, Supermoto and Off.

The pricing for the Royal Enfield Continental GT 650 starts at INR 2.65 that is a great deal for such powerful and retro classic with modern touches. The other variant such as the Custom and Chrome is priced at INR 2.72 lakhs and Rs 2.85 lakhs that definitely will undercut the KTM Duke 390 priced at INR 2.42 lakhs.