Happy days ahead for the Volkswagen fans. A special ‘black and white’ edition has been launched by Volkswagen for its Polo, Ameo, and Vento models. The special edition launched will be exclusively available at the Volkswagen showrooms across the country without any additional cost.

Talking about the features, the special edition for all models will come with a rear spoiler, 16-inch 16-inch ‘Portago’ alloy wheels, black painted roof, black ORVMs, black and white leatherette seat covers, and a ‘Black and White’ chrome badge. Apart from these, the ‘Deep Black’ color option has also been reintroduced by Volkswagen for Polo and Vento models only. If we discuss the power and performance, then all the new ‘Black and White’ models houses a 1.5-litre four-cylinder turbo-diesel unit. Although transmission options and performance differs in hatchback and sedan models as expected. The powertrain in Polo hatchback churn out a power of 90 bhp and comes mated to a 5-speed MT. On the other hand, both Ameo and Vento sedan comes with a 119 hp engine, which can be mated to a 5-speed MT or 7-speed dual clutch AMT. 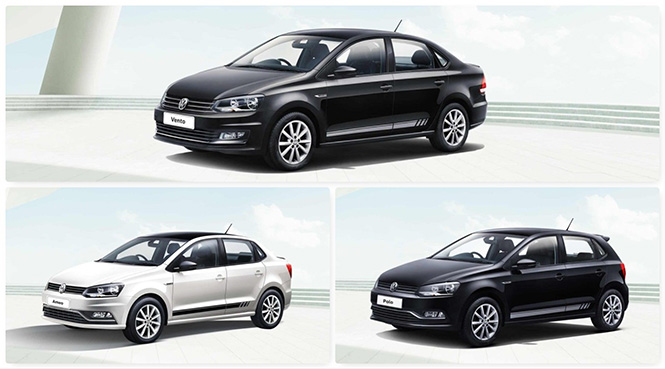 A 1.0-litre three-cylinder petrol motor option is also available for the Polo and Ameo models. The petrol powermill produces 76 hp of power along with a peak torque of 95 Nm. A 5-speed manual gearbox comes with the petrol powertrain in both models. If we talk about the Vento model, then this car houses a larger 1.6-litre four-cylinder petrol powertrain that generates 105 hp along with 153 Nm of torque and also comes mated to 5-speed MT only. A 1.2-litre turbo petrol engine option is also there for the Vento and Polo models that is capable of producing 105 hp and 175 Nm torque, which can be paired with 7-speed dual-clutch AMT.

Discussing competition, the rival list of Polo include Maruti Suzuki Swift, the Hyundai Grand i10 and the Ford Figo whereas the Ameo lock horns against midsize sedans like the Hyundai Verna, Skoda Rapid, Maruti Suzuki Ciaz, and Honda City.

Volkswagen To Pay More Than 171 Crore As Penalty in India: Check out Why
Views: 2240