Tata motor is testifying the driving dynamics of its refined lineup of cars after the upcoming BS-VI emission norms. The latest car to be blotched from the lineup is the facelifted Tata Tiago, which showcases an eloquent innovation and is anticipated to host a carmaker's new ALPHA platform.

Tata Tiago facelift was spied on test along with Nexon to bring IMPACT 2 design language.Tata Tiago and the Nexon, both are the two top-selling cars of Tata Motors. Tata Tiago was first launched in April 2016 and is the highest selling car of Tata, covering an average monthly sales of about 8,000 units. While the Nexon was launched in Sep 2017 and is the second best selling car. Imbibing the Tata’s latest design language in Tata will probably encounter even more sales.

Automotive Zealot Dennis Kalyana spy clicked the photos of the car when the cars were being offloaded from a trailer in Chandigarh.It is believed that the tests are taken in northern regions to examine the feasibility of the vehicles in high altitude and cold weather. 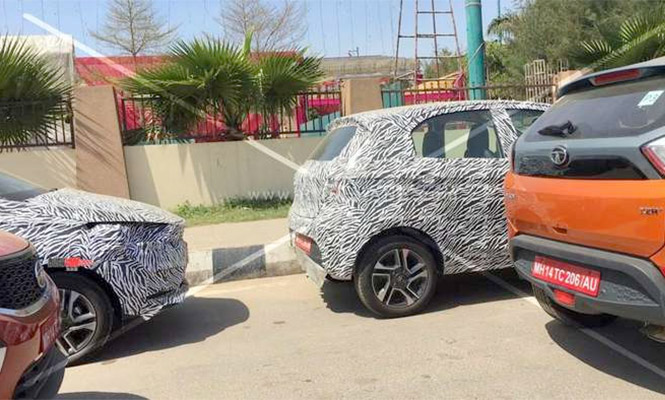 Exteriors, as well as interiors, are expected to get up-to-date refined. The new Tiago will overthrow the XO platform and be based on the versatile and more safer ALFA platform, which will initially be witnessed in the Altroz hatchback, going to launch later this year in India. According to Tata ,building the hatchback on these new 5 star Alpha and Omega platforms ensures an elevated safety. Alfa platform will also enable Tata Tiago to go hybrid as well as full electric.

One of the reasons behind upgrading the engine option is that Tata wants to duly meet BS6 norms and this will restrict the availability of Tiago in diesel engine option. 1-liter diesel 3 cylinder will be terminated from Tiago and Tigor line-up while Nexon will be offered in diesel & petrol engine as well.Engine specifications of Tata Tiago will encompass a 1.2-liter petrol engine, mated to a 5-speed manual and 5 speed AMT, delivering 85 hp max power and 114 peaks Nm torque.

Today, the Tata Tiago is the best selling Tata car, contributing more than 42.21 percent to the company’s total passenger vehicle sales with the total sales of 8,286 units in the past month. Tata Tiago’s competitors include Hyundai Santro and Maruti Suzuki WagonR.

The relaunch of Tata Tiago is anticipated next year at the 2020 Auto Expo at an increased price due to encompassment of the 5-star platform, updated BS6 engine, and refined features.