Volkswagen is gearing up to premiere the extended wheelbase version of the best-selling Tiguan SUV - the Tiguan Allspace at the upcoming Geneva Motor Show 2017. The show will be kicked off The new Allspace features a longer wheelbase by 109 mm and 215 mm of an additional exterior length over the standard model.

With the introduction of longer wheelbase Tiguan Allspace, the carmaker is about to fill the small gap between classic Tiguan and top-range SUV Touareg. After increasing the wheelbase, the 5+2 seater the Allspace has a decent head and legroom in the second and third row. The SUV features a class leading boot capacity of 760 litres which can be further extended up to 1,920 litres after folding the second and third row seats.

However, the exterior silhouette and front fascia hint the similar profile with carmaker’s another SUV, the USA-based the Atlas. At the front end, the distinguish details include newly designed triple slates radiator grill, out of which upper and lower flows across the front fascia of the car while the middle expends up to the headlamps. The front bumper hosts fog lamps and large air dams. The Tiguan Allspace is also all equipped with granite grey underbody protection which comes as a standard.

Similar to its older sister Classic Tiguan, the Allspace will be available in both on-road and off-road versions for the front part of the SUV. the latter also includes an “off-road package” that counts on special underbody protection for the powerhouse which flows through the bumper. 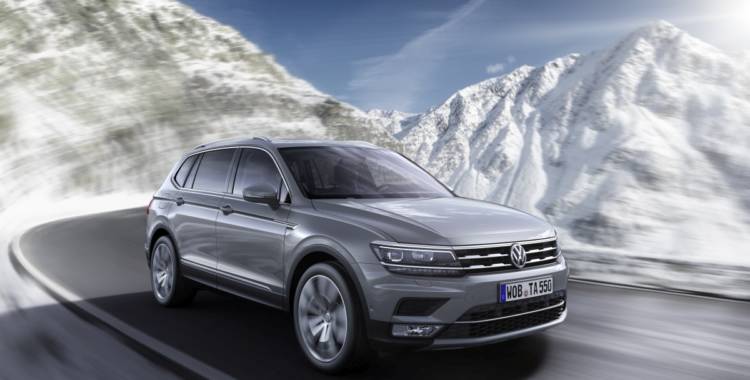 The standard equipment details include electrically operated tailgate, silver roof rails and Keyless entry. In addition to this, the SUV will launch with company’s new generation smart Infotainment system.

On the mechanical front, the new Tiguan Allspace will be introduced in both front-wheel and all-wheel drive arrangement. In terms powertrains, six high-torque TSI and TDI engines will be on offer. The three turbocharged petrol mills develop power ranges from 150 PS, 180 PS and 220 PS. while on the other hand, the three turbocharged diesel powered motors output levels include 150 PS, 190 PS and 240 PS.

For more update stay tune, the 2017 Geneva Motor Show is about to begin!!

Volkswagen To Pay More Than 171 Crore As Penalty in India: Check out Why
Views: 2056