Yuvraj Singh will be Hosting the IBW 2015 with Autologue Concept

The most passionate cricketer of the Team India will be fascinating the India Bike Week, this year. However, if you will come to know the name of the personality, I can bet you'll never ever miss the IBW. Yuvraj Singh, the person carrying amazing personality on and off the field. Although, he loves custom-made motorcycles and he will be showcasing his latest custom-work at the upcoming India Bike Week, which will be going to take place in Vagator, Goa. The IBW will be starting from 20th February and will take off on 21st February, 2015.

Yuvraj Singh will be launching his very own Youwecan KTM motorcycle designed by Autologue Design, named as X12. The Pune based Autologue Design has designed the X12 by taking inspiration from the KTM Super Duke R. Apart from this motorcycle, the custom-maker will also be showcasing Autologue KTM X26 body kits, Hero Impulse off-roading kit and Royal Enfield Cafe-Racer kit. Mukul Nanda is the hand behind the concept and designing of the super sports motorcycle. This is not the first time, when any cricketer is showing up their interest in the custom motorcycles. Dhoni has showed up with his Confederate motorcycle and a Hayabusa for Dhawan are also in the same row. 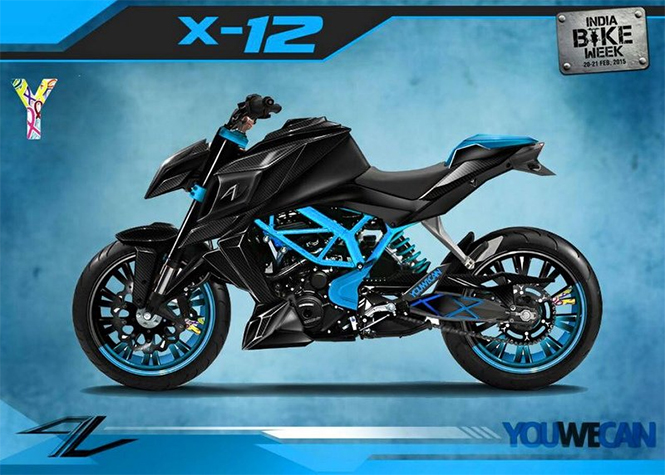 Mukul Nanda Speaking about the their Autologue's participation in the IBW, "India Bike Week is the biggest platform for bikers and it is organized on a big scale with hardcore bikers participating from across the country and even from other parts of the continent, therefore we have chosen IBW as a launch platform. It is the only bike fest that has come up in the last 2 years on a large scale and we are expecting to get the varied target audience for our customized bikes. The launches by Autologue at India Bike Week 2015 will include Youwecan KTM Bike called X12, Autologue KTM X26 bodykits for the KTM Duke, Royal Enfield cafe racer kit, Hero Impulse Off-Road kit."

Getting into the details of the X12, it is featuring amazing design and built quality. The custom-maker has installed new body panels, full body kits and also equipped with CNC machined aluminum parts. The attendees of the IBW, 2015 would probably be having a huge surprise, as Yuvi will be hosting the India Bike Week.