KTM RC Series or KTM Duke Series? Which one you should go for?

The sport motorcycles from the Austrian manufacturer have reached India. The RC Series sport motorcycles, KTM RC 390 and RC 200 have been successfully launched and the launching event was being held at Pune. It should be worth saying that the RC Series has been designed upon the base of the Duke Series. If base of both the motorcycles are same, then what should be the difference in between them?? Let's get to know about the major differences between both the series motorcycles.

KTM Duke Series: In India, we are having two models under Duke Series; KTM Duke 390 and Duke 200. Both these motorcycles are pretty much popular among the youth crowd in India. Talking about the technical specifications of the motorcycles, the Duke 390 is equipped with a single-cylinder, 4-stroke engine with an engine displacement of 373.2cc. The water-cooled engine is capable to generate a total power of 42.9BHP @ 9000 RPM and peak torque of 35Nm @ 7000 RPM. And, discussing about the KTM Duke 200, as the name appears, it is powered by a 199.5cc engine displacement along with a single-cylinder, 4-stroke, liquid-cooled, spark ignition engine. The power plant churns out a total power of 25BHP @ 10,000 RPM and 19.2Nm of peak torque @ 8000 RPM. 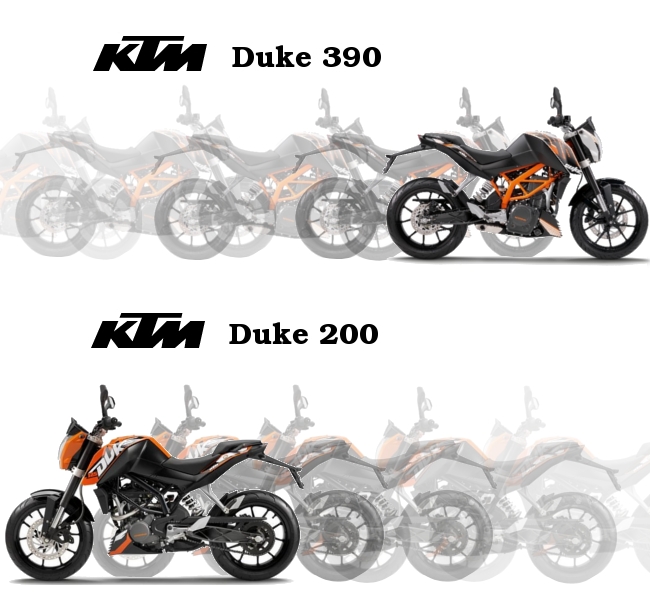 In both the motorcycles the engine is mated to a 6-speed transmission. The KTM Duke 390 weighs 139kg and Duke 200 weighs 10kg less than the big brother. The top claimed speed achieved by the Duke 200 is 138KMPH. The Duke brothers are carrying 11 liters of fuel tank and same three-compact exhaust tail. On the safety front, only the KTM Duke 390 is equipped with 9M ABS catered by Bosch and apart from that both the motorcycles receive Brembo disc brakes with four-piston calipers.

Appearance:- Projecting lights on the outer appearance of the Duke series, both the motorcycles looks alike cosmetically. However, taking a closer look towards both Duke brothers, you'll find minor changes, which I'm going to let you know here. 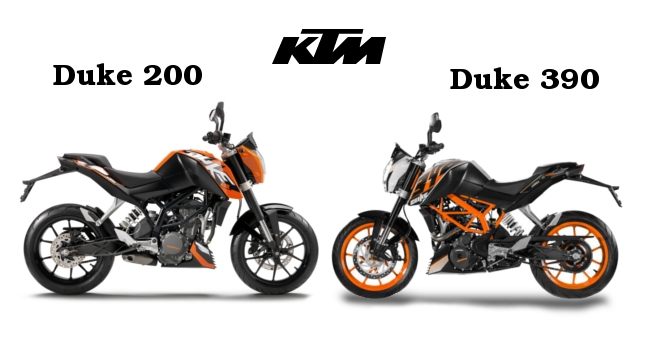 Starting from the base, i.e. Chassis, both the motorcycles are built upon same frame. The chassis of both the motorcycles has been combined with a WP monoshock suspension, which helps to generate the total power of 42.9 BHP for Duke 390 and 25BHP for Duke 200. The company has given WP Telescopic upside-down forks at the front and a lightweight, pin-jointed, high-quality die-cast alloy swingarm, which helps to enhance the riding quality of both the motorcycles. Although, the Duke 390 and Duke 200 has been using a lower range engine, but they have been built upon the racing DNA structure. 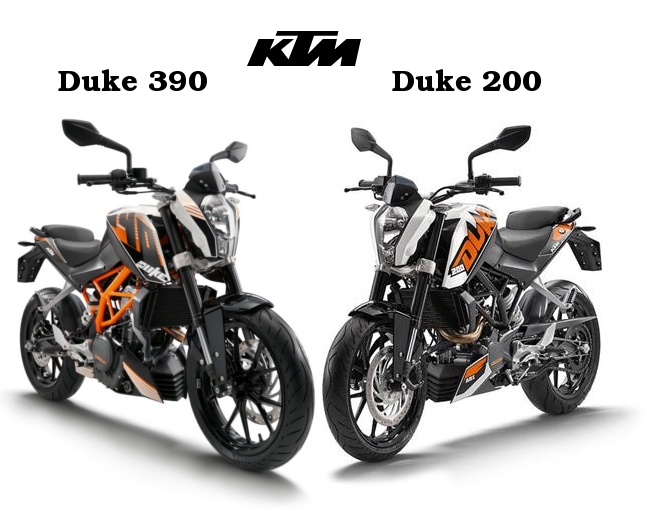 KTM RC Series:- It's just yesterday, when both the RC series motorcycles have officially entered India. The KTM RC 390 and RC 200 officially unwrapped and the technical and superficial details have also been showcased by the CEO of KTM, Mr. Stefan Pierer. Let's get deeper once again to find out the differences between the existing Duke Series and the newly launched RC Series motorcycles. 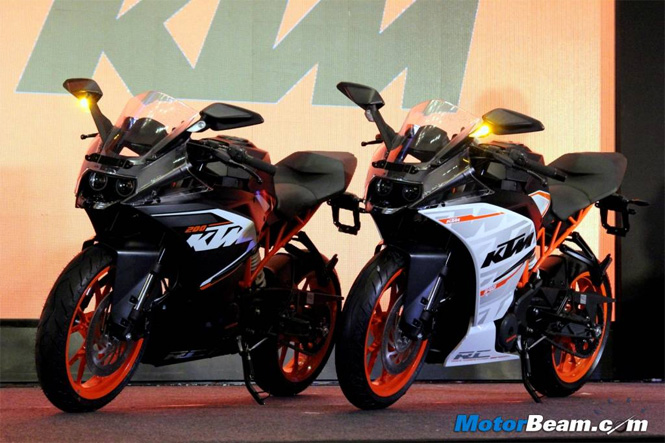 In technical terms, both the RC 390 and RC 200 have shared their engine, power and torque figures from the Duke 390 and Duke 200, respectively. The KTM RC 390 also gets powered by the aforementioned Duke 390's engine and so as the RC 200; it also shares its engine with the Duke 200. The stopping power of these motorcycles is also like tweedledum and tweedledee. The RC 390 is equivalent to the Duke 390 and RC 200 comprises only Brembo disc brakes with four-piston calipers. Both the RC brothers have been holding 9.5 liters of fuel tank. For 373.2cc motorcycles in both the series, the 17 inch cast alloy wheels have been served from Metzeler tyres, ensuring to provide the best riding quality in both wet and dry conditions. The aluminum triple clamps have also been introduced in the RC Series. 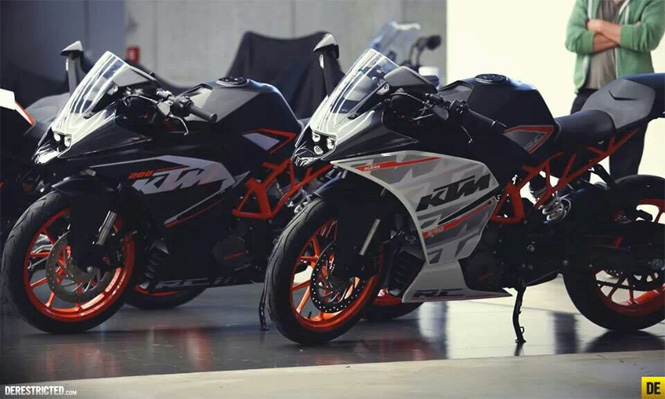 Appearance:- The major difference between these two aforementioned series is that the Duke Series motorcycles said to be naked sports motorcycles and on the other hand, the RC Series motorcycles are known as fully-faired sport motorcycles. The RC 390 and RC 200 have introduced carrying a complete sporty look as they are packed up with a fairing. A thin tail has been given to the RC brothers holding a number plate, which makes these motorcycles a high performance bike. They have gone through a complete new body wok, as they received new footrests, pedals and new twin circular-shaped headlamps incorporated with a visor. A freshly designed fuel tank along with a two-part pillion rider seat makes these motorcycles worth racing over the racing tracks. The RC brothers have come up with lesser than the expected prices. The RC 390 is priced at Rs 2.05Lakh (Ex-Showroom Delhi) and the KTM RC 200 costs Rs 1.6 Lakh (Ex-Showroom Delhi). 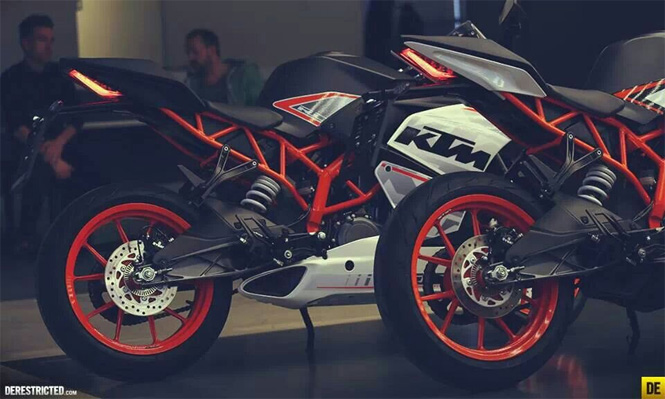