After creating buzz over Intent for the much anticipated Xperia Z4 smartphone, one more device has come into lights because of some leaks. A monster device by Sony in its Xperia segment has been spotted in leaks with monster specs. The Xperia Z4 Tablet Ultra, which has been caught on a Chinese website, Padnews with full specification list.

If looking at the leaked specs list, then Sony has plans to launch a big Xperia Z4 Tablet Ultra next year. The monster device with 12.9-inch display is claimed as the incredible invention by maker. Not the display, 3840 x 2400 pixels screen resolution is also incredible to raise your eyebrows. It is also expected to come with Qualcomm’s latest Snapdragon 810 chipset and will be clocked at 2.86GHz. Blessing this device with such supreme SoC, it has become clear that Company will equip this Xperia tablet with ultra high-end features as it name implies. 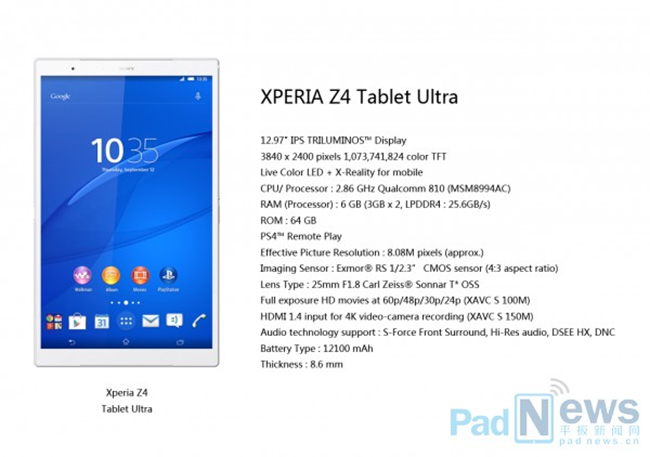 The list of leaked specs also suggests 64GB of storage and a compelling and miraculous 6GB RAM. The Xperia Z4 Tablet Ultra is also reported to come embedded with HDMI 1.4 input jack that has the ability to record 4K videos at upto 30 fps. It is also suggested to pack with a massive 12100mAh battery. It is also reported that tech giant has tried to bless it with sleek profile as it is listed with 8.6mm thickness in the leaked report.

It could be possible that Sony will showcase this bigger tablet at MWC 2015 in February or may bring it along with Xperia Z4, Z4 compact, Z4 Ultra at CES 2015.